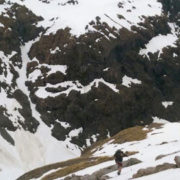 My left foot breaks through the white, crunchy snow, and I’m once again thigh deep. Moving my weight onto my right leg, I attempt to haul myself up onto the cold, wet surface. I stare up at the right side of the valley, as I’ve been doing for the past hour, scanning the ugly looking cliffs for something that remotely resembles a large, climbable slab. In an attempt to bring some comfort to the situation, I reminisce over the morning’s drive to get here, in the warm, stuffy car. A better time when I had dry feet, warm legs and no heavy, overloaded bag strapped to my back. My mind returns back to the cliffs on the right hand side, and wonder what the guide book meant when it referred to the ‘True Right’ of the valley?

It’s Labour Day, which for anyone outside of New Zealand, basically means we had the Monday off work. I’d heard about a climbing location at Arthurs Pass, a small township on the border between the West and East Coast of the South Island, known as the Otira Slabs. Two large, sloping rock faces, which according to the description online, were located somewhere on the ‘True Right’ on the Otria Valley. I had arranged to meet Steve and Jackie at the slabs on Monday, as they were heading up the day before and opting for the slightly more adventurous option of camping out overnight at the base.

It is about a two hour drive from Christchurch, which gave me ample time to try and dry my shoes, which were wet for the previous day’s mountain biking, via the car’s foot well heaters. A perfect plan, had I been able to wind the car window down a touch to let some of the heat out. Unfortunately, the noise of the open window meant that I couldn’t hear the podcast I was listening to via the car radio. So with the car sealed shut, I was essentially commuting in what now looked like a mobile steam room. With the warm, dry air filling the car’s interior, I battled against the continuing sensation of sleepiness, unable to really concentrate on the podcast. I’m sure there’s irony in there somewhere, but at the time I was too hot and sweaty to work it out.

Arriving at the entrance to the Otira Valley, I stepped out of the sauna into the cool, mountain air. It was an overcast day, but not wet, which is something of a victory so close to the West Coast. I started to pack my bag and with the weight steadily increasing, I looked at the six pack of beers on the back seat of the car. I had jokingly mentioned to Steve that I would bring some beers up with me, which now seemed funnier at the time. My bag now full of climbing gear, rope, beer and an unnecessarily large camera, I slung it onto my shoulders with a grunt. It should only be a 20 minute stroll up the valley to the slabs I thought to myself. Which upon reflection, I’m still not entirely sure what I based this on.

After an hour of walking steadily up hill, picking my way through large boulders and negotiating scree slopes, I still couldn’t work out where this slab was. To my right was several stories of black, imposing cliff, leading up to the top of Mt. Philistine. To my left was green covered scree slops, interspersed with trickling waterfalls, cascading down into the river which I now walked along side. It would have been a nice moment to take it all in, surrounded by scenery, with the sound of the river meandering its way through the valley, had it not been for my heavy breathing under the weight of the bag, and clattering of walking poles against anything within a meters radius. I tried to mentally picture the image from the guide book, and with ever increasing artistic licence, project it onto the closest looming cliff, attempting to convince myself that I had finally arrived. 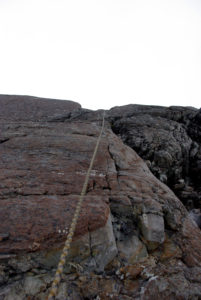 I suddenly appeared at the snow line. With it being a mild winter, I had kind of assumed that all of the snow would have melted by now. Which meant that I was slightly unprepared, wearing board shorts and an aversion to getting my feet wet. I scanned the white, glistening surface ahead of me and could make out two sets of footprints, presumably Steve and Jackie’s, continuing up the valley. I looked down at my shorts and dry shoes, looked back at the white footprints, let out an audible sigh, and started shuffling forward.

Using the walking poles for support, I ambled between exposed rocks and knee deep snow patches, attempting to minimise the amount of contact my exposed, goose bumped legs would have to endure. As the head of the valley came into view, my mind returned to what ‘True Right’ meant. Maybe the valley split off at some point I missed, or there was a ‘false right’ similar to those false summits? As moisture finally penetrated my socks, so that I now, officially, had wet feet, I spotted what looked like large, bulbous slabs… up on the left hand side.

There was still no sign of Steve and Jackie, so my new plan was to walk to the bottom of the slabs I could see, regardless of whether they were the correct ones or not. Then drink all the beer out of a mixture of principle and spite, and return back Christchurch.

With the slope steepening as I edged closer to the foot of the slabs, I began to make out what looked like a tent, and then two accompanying figures. I could instantly tell it was Steve and Jackie upon hearing their laughter at seeing a morale beaten, shorts wearing, bag hauling angry man swearing at the sky, as he dragged himself towards their general direction. Arriving at their makeshift camp site, I squirmed out of the bag straps and dumped the bag down. 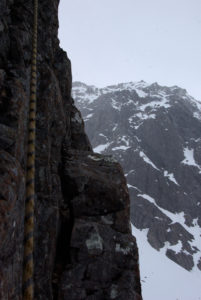 After several minutes of me bitching about the directions to get to the slab, followed by Steve casually mentioning that ‘True Right’ refers to when you’re walking down stream, which promptly silenced my complaining, I was able to admire the camp they had constructed. A large solitary rock formed the left wall, and snow had been dug out next to it, down to ground level. Rocks littered the floor in a rough shape of two beds, with the back wall and right wall composed of compacted snow. A canvas sheet was slung over the top, creating a make shift cave which actually looked quite cosy. Some large stones had been stacked at the entrance, providing a nice viewing platform to observe all the avalanche debris on the far side of the valley.

With a beer, cup of tea, sandwiches and cake consumed, I was feeling much perkier, as the subject of climbing was discussed. That morning, while I was driving over in my four wheeled tumble dryer, Steve and Jackie had already climbed the one of the slabs, and were keen for me to have a go. I looked across to my bag brimming with climbing gear, shrugged my aching shoulders and got geared up. On the insistence that we used my rope, to justify carrying it all this way, we started to skirt around the slab to set up a top rope. Scrambling over rock and through snow, we arrived at the top and I finally got an impression of how large these slabs were. As the whole valley area is large and imposing, smaller details tend to be diminished, and it was only when standing at the top of the lower slab, that I realised how exposed we were.

With several anchors set up, I abseiled down to the bottom of the face with the intention of having a quick, ‘cheeky’ climb, to validate the days efforts. I stared off down the valley and could see grey, menacing clouds encroaching. I followed the clouds upwards; to above where we currently were, and it became apparent that the weather wasn’t encroaching, it was already here.

‘Weather’s coming in’ I shouted. At which point it started snowing.

I began my ascent, using the long, spindly cracks to support my numbed hands, as my shivering, knobbly legs brought up the rear. Had it not been for the weather, inappropriate clothing, tired legs, aching back and needing a piss after all that tea and beer, it probably would have been a nice climb. The rock was solid and for a change I was actually climbing within a grade where I could enjoy myself, as opposed to panicking at the first sign of a crux.

My head popping up above the top of the slab at the end of the route, I saw my belayer Steve, wrapped up in several layers of thermals, quietly fending off the increasing blizzard.

‘Right, shall we go then?’ I enquired, this time with far more cheerfulness. A silent nod sufficed as a response, we quickly packed all the gear away and retreated to the snow cave. We cleared up the mess the Kia had made while we were away, it turns out they’ve now worked out how to open Tupperware, and prepared to evacuate the camp site. Ambling down the valley, through falling snow, and then falling rain, as we descended in elevation, we eventually arrived back at the cars. Driving back to Christchurch, with hot air filling the car for the second time that day, as I attempted to dry my shoes, I began to do the day’s maths; 4.5hrs driving, 3 hours walking, 30 minutes scrambling, for 3 minutes of climbing. Or to put another way, ‘A good day’. 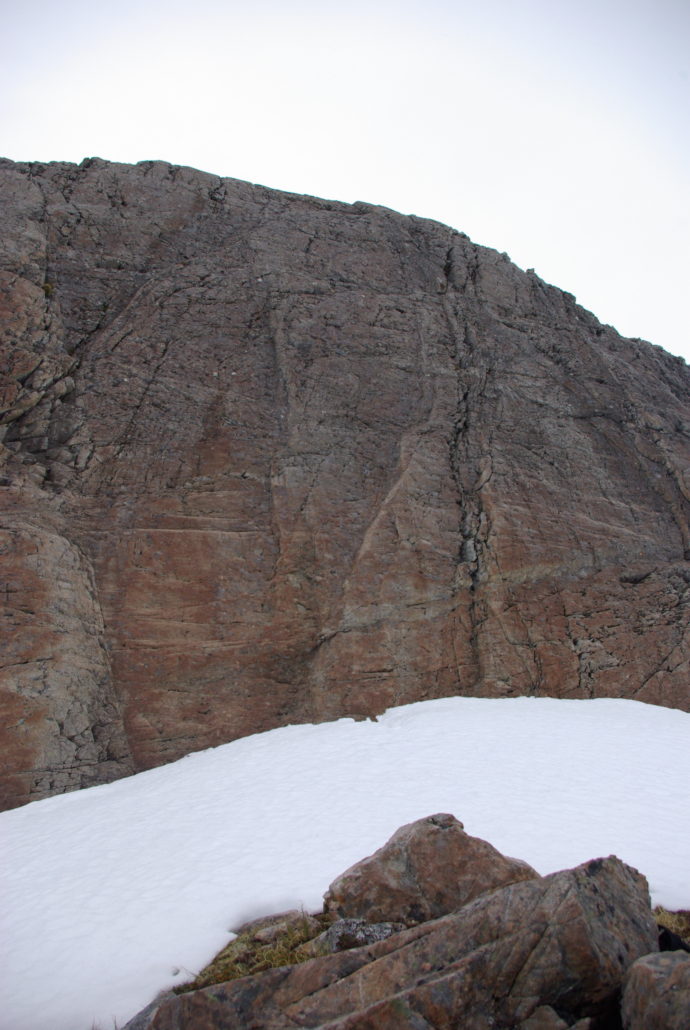