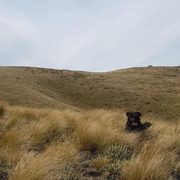 I stood amongst the scattered, moss covered rocks on what was presumably the summit, and looked down into the Hakatere Conservation Park, reflecting on how many attempts it had taken us to get here; four, to be precise.

The first was cancelled owing to a large flock of sheep that had congregated at the beginning of the track. I had begged Ian to let me out of the car so I could chase and bark and herd and bark some more, but he was having none of it. The truck was promptly turned around and back to Christchurch we went.

The second was cancelled due to the humans dealing with a hangover, whatever that is. I bounded into their bedroom at the crack of dawn, as we had arranged, with my bags packed and eager to explore; only to be greeted with an ushering out of the bedroom and the door remaining closed until midday.

The third was cancelled due to bad weather, which seemed reasonable.

On the fourth attempt, we had succeeded in making it past the trail head car park, which if nothing else, was an improvement on all the previous efforts. However, all those failed attempts had slowly increased the sense of expectation which now, standing at the summit, may have slightly exceeded reality.

For those of you who haven’t worked it out yet, I’m obviously talking about Mt. Barrosa, located within the Hakatere Conservation Park, in Canterbury, New Zealand. When Ian and I first decided to embark on more adventurous walks, Mt. Barrosa was one of the first tracks that we had come across while trying to find interesting, dog friendly locations; though the idea of walking it essentially remained an idea until this fourth attempt, which was how we found ourselves early one Monday morning. Standing at the trail head, with a pale, cloudy sky hanging over us, we looked up into the surrounding green mountains, and our eyes followed the ridge line that would usher us to the top. A sense of anticipation hung in the air, as we gingerly opened the gate and began the walk. I half expected a crack of lightning to shatter overhead, as the weather suddenly darkened, scaring Ian back into the truck. Or a flock of angry, baaa-ing sheep to come scuttling over the horizon, once again scaring Ian back into the truck – seeing as Ian is Welsh and sheep can be quite vengeful. 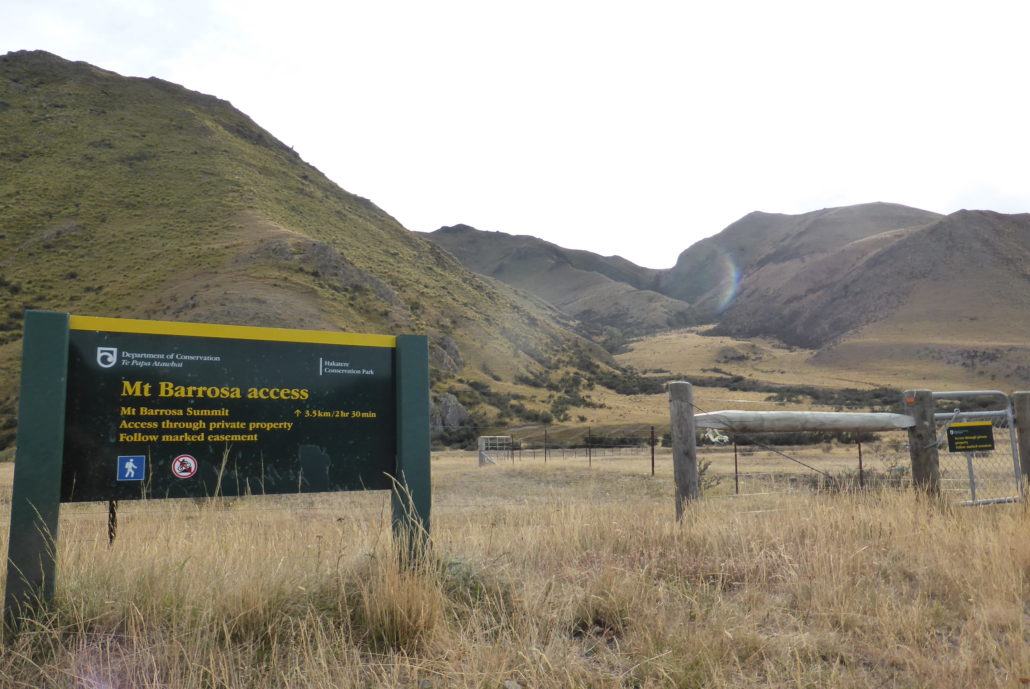 The only thing that actually happened was that I had to suffer the indecency of a lead, as the first kilometre of the walk crossed private land, in spite of there being absolutely no sheep in the vicinity. I attempted to explain that my sense of smell was far better at detecting any sheep than Ian’s gradually diminishing eye sight, but he was adamant, and I remained on the lead until we crossed the boundary into the conservation park. Once out of the private area, the track took on a steeper grade, while covering a variety of different terrains. At times we were traversing through low lying alien flowers, then scrambling up rocky ascents, and then strolling through scrub, all within the distance of a kilometre. 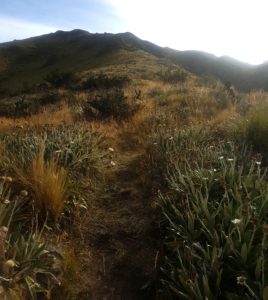 As we slowly elevated ourselves, following the orange tipped waratahs that led us along a rough spur to the first plateau, the views into the Hakatere Conservation Park began to reveal themselves. The brown expansive plains extended like a stretched fabric towards the mountainous horizon, interspersed with isolated hills, resembling air pockets attempting to burst free. The Hakatere River and Hakatere Potts Road were like rips, cutting through the material landscape. We sat for a short while, discussing various textile based metaphors and enjoying the view, before it dawned on us that we weren’t actually at the top yet, and should probably press on. We had made it this far without incident, and the reward for finally being able to complete the walk lay atop the final climb behind us. My mind drifted to thoughts of a large, disorderly flock of sheep milling about at the summit, accompanied by a stricken shepherd, unable to herd them and at a loss. He’d greet me with open arms saying ‘thank god you’ve arrived! I’ve been here weeks, waiting for a competent, able bodied herder, such as you, to help me regain control of my flock’. I would bound into action and get his sheep into the most regimented, military themed formation in the history of herding…

Maybe it was my lack of attention to where we were going, as I daydreamed of other such rewards that possibly lay at the summit, but I started to notice that the final section of track was starting to take on a slightly different kind of feel. As in, a slightly non-existent kind of feel. Although waratahs were scattered about the place, it seemed quite a common occurrence to lose the path and end up scrambling over rocks and through spikey vegetation, to then, without much fuss, subtly re-join it again.

As we neared the summit, directions were made slightly easier by the appearance of a decrepit wire fence, which ran parallel to the fictional path, all the way to the top. Although useful, it did slightly undermine the sense of adventure and exploration, knowing that at some point, someone had taken the time to divide one bit of remote land from another.

We eventually reached what could, at best, be referred to as the highest plateau of the walk, thus indicating that we had reached the top. Looking around for some sort of trig point to use in the foreground for the obligatory summit photos, the best we could find was a random selection of rocks, amongst other randomly scattered rocks, which was presumably the trig point. 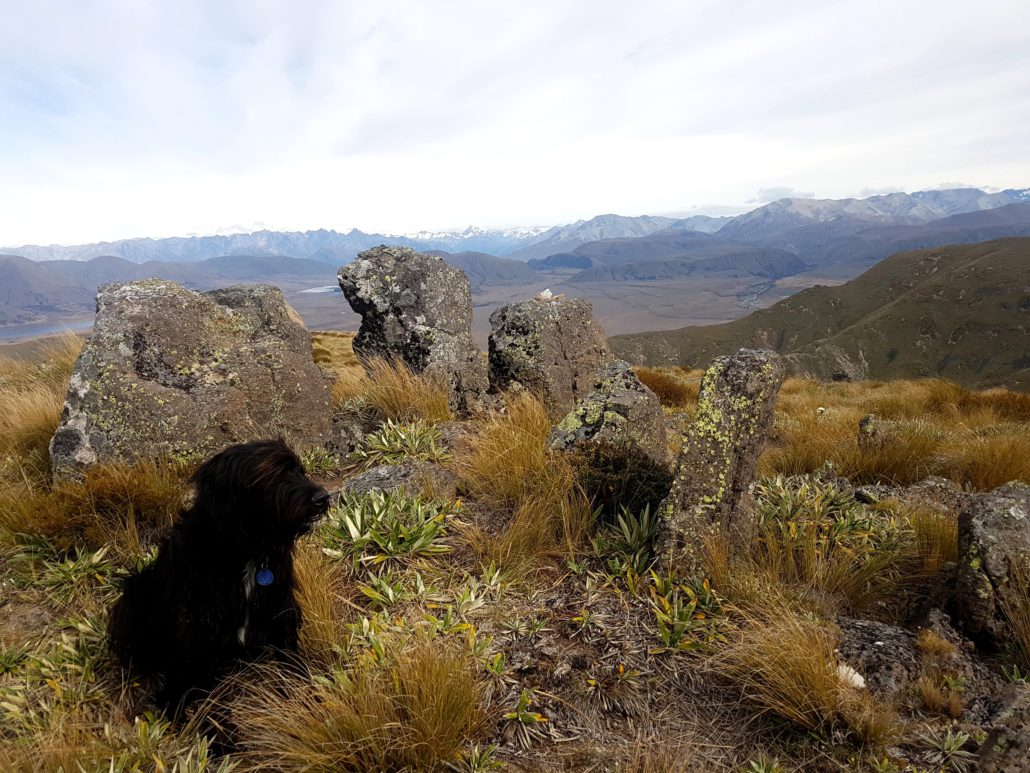 There were no sheep. No shepherd. No greeting party. Not even a ‘Congratulations’ banner slung between the strewn boulders. After all the failed attempts we had endured to make it to the top, I had to admit that I was expecting something slightly more elaborate than what was on offer. We kept looking round, thinking that we had mistaken the highest point as some sort of fake summit, and had somehow ignored a looming land mass behind us, but to no avail.

With the slightly underwhelming acceptance of finally conquering the mountain, we sat back and enjoyed the view. Which was nice, until we casually looked behind us to witness what appeared to be the start of a nuclear war. With a number of fires burning across the Canterbury Plains, and little to no wind, the resultant smoke resembled the launching of several atomic weapons. Which I will be the first to admit, is an odd metaphor for describing the view from the top of Mt. Barrosa. 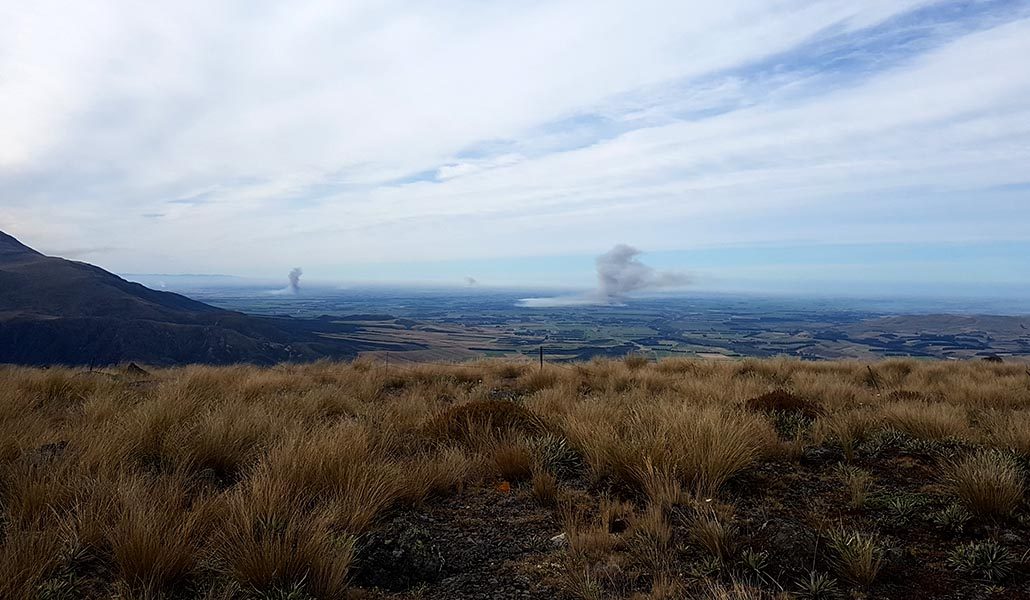 As we began our retreat off the mountain, conversation turned to the pros and cons of returning to a post-apocalyptic Christchurch. Yes, the zombies would be an issue, but getting a whole Adventure Park to yourself would be pretty cool. I nodded in agreement, not really listening to Ian waffle on, as I tried to think of a more suitable way of ending this story… 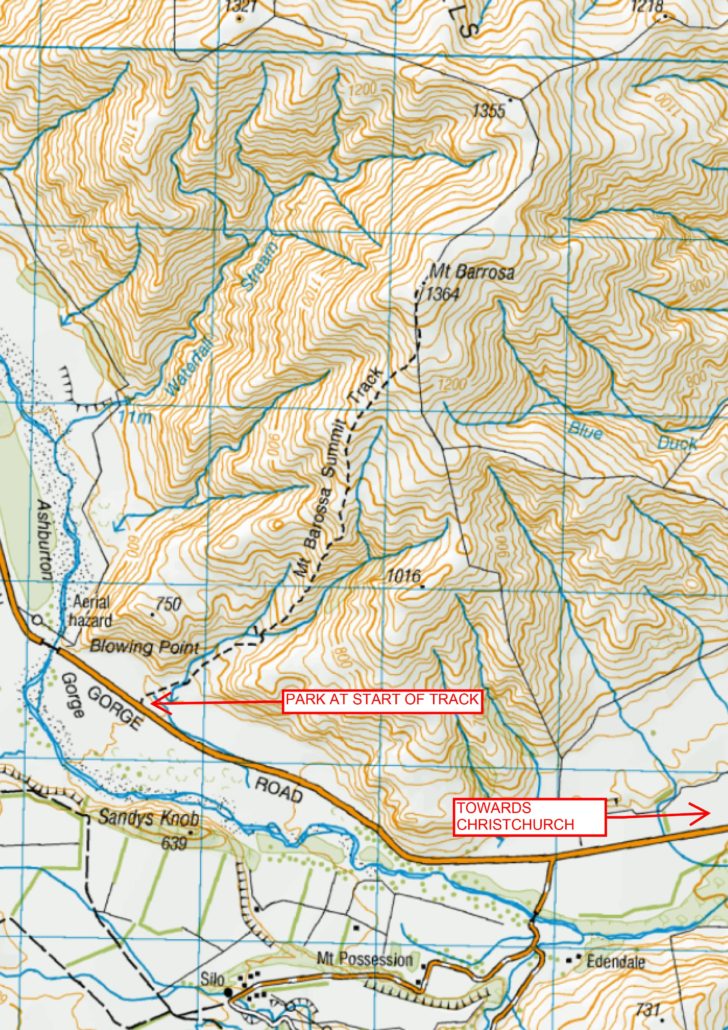