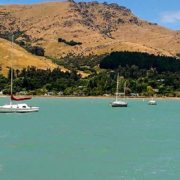 There are some things you never expect to say:

‘Damn it man! I need the launch codes’

‘YOU CAN’T HANDLE THE TRUTH!’

But this weekend, I got to cross one of the phrases off the list.

To paint the scene; myself, Alex and Kat were huddled into an inflatable dinghy, motoring over to our friend’s boat for what would eventually be, after some minor drama, a lovely day of sailing. I was at the helms deep, or driver’s side, or whatever the nautical term is for operating the outboard motor. Alex was sat in the middle, and Kat was at the front. Also joining us on the voyage was a large, black canvas bag and some food and drink supplies for the bbq.

It was a 5-minute motor from the launching ramp to the sailboat, which factored in the slight chop-chop of the sea. At around the 3-minute mark, I noticed that the ever-present pool of water in the dinghy and had grown somewhat. It appeared that the small amounts of seawater that were splashing over the sides into the dinghy were beginning to get organised. To put in context, we were at DEFCON 2 – ankle deep water.

We laughed it off, as I held our course steady and true. A minute passed, and the volume of unwanted water had grown from a ‘meh’ to an ‘err’. I noticed the canvas bag start to bob about, and a loose sandal casually float between my legs, indicating we had reached DEFCON 3 – shin deep water.

The sailboat was still a minute away.

‘So, er, you may want to start bailing,’ I suggested.

Alex and Kat burst into action, splashing about in the water in a futile attempt to battle the rising tide. Although in fairness, from a distance it would have looked as if they were just frolicking around.

Thirty seconds away and we’d reached DEFCON 4 – knee-deep water, which was worrying as the interior of the dinghy was about knee deep. As I watched a packet of vegetarian sausages and the sandal escape over the side, I knew as captain, that it was time to give the order.
‘Abandon ship!’

My crew gave a salute, and leapt out, fully clothed, with mobile phones in pockets. The contents of the dinghy soon followed. The outboard motor then cut out and I prepared myself to heroically go down with the ship.

However, the jettisoned weight allowed the edges of the dinghy to remain just above the sea level, preventing it from taking on any more water.

I grabbed the emergency oars and skilfully rowed in circles for several minutes before the sailboat came to my rescue. I was thrown the bucket of shame, allowing the bailing process to commence.

I’d stared death in its ugly face, and won. Which was why it was left to Kat to leap back into the murky depths to retrieve the floating bag of vegetarian sausages. 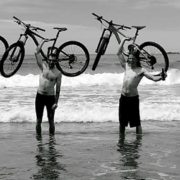 A question that gets asked a lot when explaining some new event that we’ve just thought up.

Whether it’s the Mega-Multi-Sport Day – where as many activities need to be completed in one day.

Or The Perfect Work Week – a different activity is done each evening for a week.

Or currently in the planning stages, 28 Crags in 28 Days – fairly self-explanatory that one, minus the zombies. Although that is an interesting angle.

The undertaking of the most recent challenge was no different – 7 Days, 7 Rapakis. For those of you uninitiated with the Rapaki Track in Christchurch, it’s a 4km, 300m vertical ascent, gravel road. Common words that may be associated with the track include: slog, miserable, cruel, unnecessary, ‘load of bollocks,’ and ‘I’m never doing that again’. All positive descriptions that persuaded Adam to organise a challenge of riding up it each day for a week. He also very kindly arranged it during a heatwave, resulting in an additional battle against 30-degree heat.

As with most of these things, there were several aspects to consider.

The logistics of trying to fit a 2 hour ride in each day. This resulted in 6:15 am starts, night rides and ‘I’ve already drunk two beers and feel great, no wait, hang on, I’m coming down, a coffee will sort me out, oh no, now I feel worse, I really don’t want to go out,’ rides.

There was the obvious fitness factor. Several years ago I commuted 15 miles each way to work on my road bike. I was confident the commute would turn me into a cycling machine, bringing me to the peak of my fitness. However, in reality, by Wednesday my legs were shot, and by the weekend I was reduced to a feeble old man, only really capable of sleeping a lot and napping. In this case, I was generally able to hold it together until Saturday morning before the legs started to feel weak. This came to a head on the final Sunday ride where they just gave up altogether, along with my enthusiasm for the challenge, and general positive feelings towards Adam.

Finally, there was the enjoyment factor. I may have hinted at this already, but generally, the enjoyment seeped out of my pours by the litre each time I ascended the track in the scorching sun – apart from that one time when it was raining. That said, the compulsory Emerson’s Pilsner at the end of each ride did go some way to numb the pain, and dull the miserable memories.

So, to bring it back to the question of ‘Why?’

Well, if you have to ask, then you’ll never understand.

A full write up of the week will be put up on the Entertaining Adventures website at some point in the near future, along with lots of photos of the Emerson’s Pilsners we drank after each ride, mainly in the hope of getting sponsored next time. 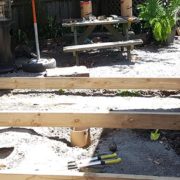 For the past week or so, we – by which I mean my Dad and occasionally me – have been building a new deck in the back garden. And as much as I was expecting this post to be a humorous account of my inability to use hand tools; or not knowing what an ‘Impact Driver’ is; or how can a screw be self-tapping, is it sentient or something? Etc. Etc. The post ended up going down the route of Communist, Victorian bricks that aren’t as metaphorical as I had first hoped.

So obviously, as we all know, a deck consists of bearers that support joists, that in turn supports the decking. The bearers need foundations that go at least 500mm into the ground, which therefore requires holes to be dug and filled with concrete, naturally. As it has been a while since these finely manicured, soft hands have graced anything that may even be remotely associated with manual labour, we hired a two-stroke post holer to help do the job.

We had pulled up the existing patio in preparation for the new deck, and stood either side of the twirling machine, gripping it tightly as it bored its way towards A Coruna in Spain (don’t belive me, I checked: https://en.wikipedia.org/wiki/Antipodes#Cities). The first couple of holes went quite well, until about the 6th one when after 200mm we hit solid rock. The house was built at the end of the 1800’s, so there was a certain amount of intrigue into what exactly we may have unearthed.

Getting out the shovel, it slowly became apparent that we had hit a layer of bricks – OK, we were probably hoping for more, but let’s see where this goes.

More digging unearthed an old patio – right… well, I don’t think any of us were expecting that.

It appeared that at some point in time, the past owners of the house had decided to install a new patio, by covering the existing one in a bit of sand and just laying bricks over the top. So had we decided to have designed the deck a bit differently, we could have potentially had a deck, over a patio, over a patio.

Which is where the metaphorical bit comes in. I can’t help feel that there should be some deeper meaning in there; a commentary on civil liberties under a Labour/Green/NZ First government; or the social rights of the native flora and fauna of Canterbury; or highlighting an injustice of some kind.

But as I think I’ve already implied, I’m not a deck person. So instead will just end with a rhetorical question of how exactly Communism managed to infiltrate the Canterbury brick industry during the late 1800’s? 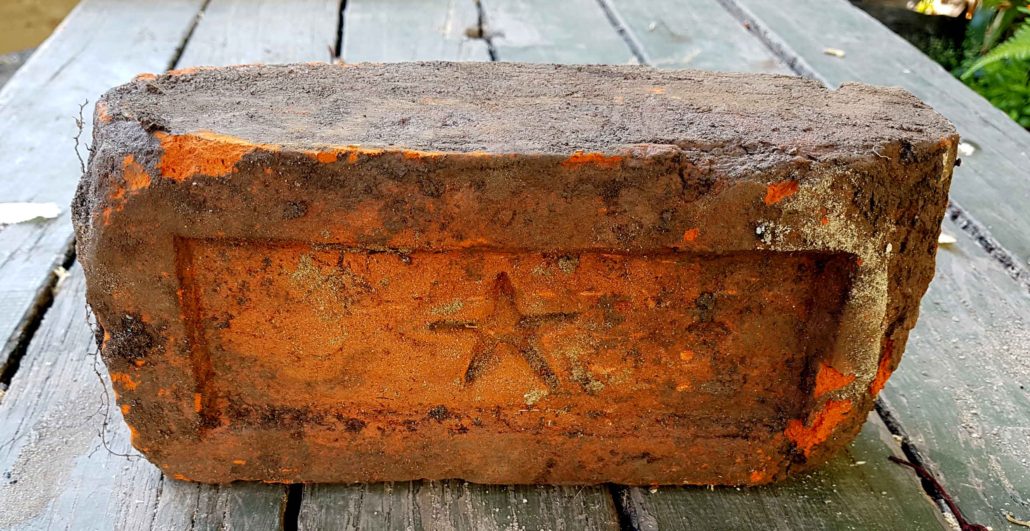