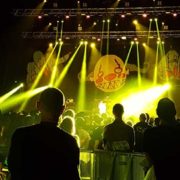 10 bonus points if you can guess the band. 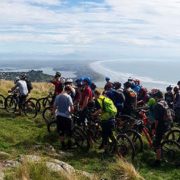 To conclude the final instalment of the three-part Enduro Series – yes, it was series – it was hot, which should come of little surprise as it appears to be an underlying theme of the races this year.

What didn’t help matters was the high-vis uniform I was wearing due to my role of ‘sweeper’ for the day. I’d originally hoped that I was going to be handed a soot-encrusted chimney sweep, flat cap and tap-dancing shoes so I would finally get a chance to break out some of the musical numbers I’d been working on, but alas.

For those that don’t know, the role of a sweeper is to check that the race stages are clear of riders and that no one gets left behind. This essentially amounts to milling about at the back of the race pack and patiently waiting for everyone to set off. You then continue to hang around for an inordinate amount of time in the hope that the racers in front of you have finished the stage – as no one wants a high-vis wanker chasing them down, shouting at them to get a move on.

I’d volunteered for the role as part of my ‘Ian has obviously done something bad in the past and is evidently trying to make things right by volunteering a lot’ push.

However, it was only the morning of the race that it dawned on me that I may not be well suited for the role of sweeper.

See, I average about a crash a run and have been plagued with all sorts of mechanical malfunctions during race day. What also didn’t help matters was that I was borrowing a mate’s bike.

So instead of attacking the race stages and inevitably maintaining my crash average, I decided to cruise, take it easy, go at my own pace.

After the second stage I noticed that I had a good flow going on. It seemed that taking the race pressure off had actually improved my riding. Things were going well. I was smiling.

And I know what you’re expecting.

But it didn’t happen.

I crushed stage after stage without incident.

This was by far the most successful Enduro to date.

I arrived at the finish line buzzing and high-fiving.

I collected my results and eagerly scanned the printout. 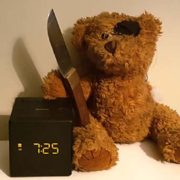 “What’s that? You were stuck in a backcountry hut for three days with a crazy Danish guy?”

It’s not very often that an idea for a horror story, magazine article and blog post all arrive at once, but hearing the cabin fever-inducing experience of a couple who recently walked the New Zealand Te Araroa track sparked a few light bulbs.

I can appreciate the romantic aspect of walking for weeks on end through stunning scenery with only your thoughts for company. Although it can be a useful opportunity to sort out some life-admin, set a few life-goals, and mentally occupy yourself with other life-based chores, there is the other end of the spectrum.

As I’m sure we can all agree – people ruin everything.

So when you’re forced into several days of unwanted social interaction as you wait for the weather to clear, I can understand how people may get a little testy. I hate having to make elevator conversation for all of 20 seconds, so three days’ worth of it would be precisely 12,960 times worse.

It lends itself quite nicely to a horror story. A claustrophobic whodunit involving several people trapped in a small, backcountry hut. I can see one inherent problem though – how do you make what is essentially a boring, tedious experience exciting to read?

It’s going to be difficult to crowbar in a car chase or zombies to spice things up a bit while you kill time waiting until someone goes mad and feels the need to throttle the Danish guy.

I don’t know what all the fuss is about with selecting a captivating book title – these things just write themselves.

There’s even a pre-arranged soundtrack to accompany it: