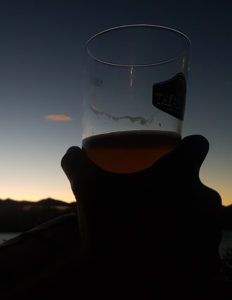 I sat on the wooden deck, stared out at the coloured remains of the set sun, and reflected on the day’s events. We’d completed the majority of the activities, the weather had been fantastic, and my choice of celebratory craft beer was, to put it mildly, a triumph. Generally speaking, this had been a massive improvement on the previous effort nine months ago. I sunk a little deeper into the Cape Cod chair, took another swig of my frankly delicious pale ale, nodded to myself with the smallest of grins, and decided to chalk up the day as a success. Granted, my top lip was still painful, and there was the small matter of Ed’s broken back, but you can’t win them all…

In August of the previous year, we attempted a Mega Multi Sport Day, which involved completing seven activities during one long day, that included; skiing, hiking, rock climbing, mountain biking, surfing, bouldering and caving. The weather was against us for that effort, and in addition to dealing with a horrendous downpour, I spent the majority of the day stressed as I attempted to keep the group on schedule, allowing us to complete all the activities in time. Learning from that experience, I had planned a similar event in, , , early autumn (admittedly we did encounter some slight scheduling difficulties) to improve the weather odds, with an itinerary of more modest ambition. Friday night we would camp a short walk from Rakaia Gorge, located in the shadow of Mt. Hutt, in Canterbury. The fun would really start on Saturday, consisting of mountain biking at Mt. Hutt, followed by deep water soloing and bridge jumping at the Rakaia Gorge. We would then drive to Charteris Bay, located on the outskirts of Christchurch, for some rock climbing and pump track racing. The day would be rounded off with a victory BBQ.

Friday evening was spent in high spirits as we sat in a circle and discussed the various activities that lay ahead. Conversation routinely returned to the various potential outcomes, good and bad, of jumping off the Rakaia Gorge bridge. None of us had actually done it before, and minor details such as; bridge height, water depth, water temperature, if sharks swam this far up river etc. were unknown. The only advice we had was from a mate who had jumped off it while at university, who described it as ‘high enough that once you have jumped, you have time to regret it before you hit the water’. A nervous laugh was the last sound to be made before we retired, in silence, to our tents. 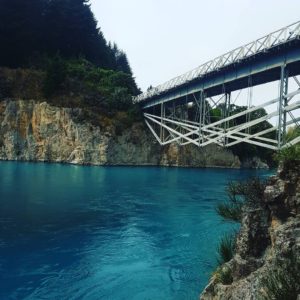 Predictably, morning arrived and it was decided to move the bridge jump and deep water soloing to before breakfast, the reason being that as it was hanging over us, it was better to just get it out of the way. One by one, the group reluctantly got changed into wet suits and we nervously walked the short distance to the bridge – a scene that resembled the final moments of the condemned walking to the gallows, if they had capital punishment in Atlantis. Looking over the side of the bridge, the turquoise water below seemed further away than when I last checked, and somehow colder than I remembered too.

No one wanted to be first, due to the unknowns potentially lurking under the pale blue surface. After much nervous joking and not a lot of action, Steve muttered ‘screw this’ and a few seconds later there was a large splash. Thankfully seeing him rise to the surface smiling, this set the standard, and one by one we took it in turns to leap from the bridge. As I plummeted from the skinny, wooden structure, arms flailing frantically, I had plenty of time to reflect on why exactly I had suggested the bridge jump in the first place. It was meant to be a joke, which had somehow gained traction and worked its way onto the itinerary. My thoughts then drifted towards what I was going to have for breakfast after, and having to remember to mow the lawns the following day, until eventually my train of thought was promptly interrupted by impacting the river. A combination of cold, shock and endorphins coursed through my body, as I swam to the surface to free myself from the icy depths. A quick body scan revealed no broken bones or general pain, which I indicated to the onlookers with a broad smile and a ‘Whoop!’-ing noise.

We finished the pre-breakfast shenanigans with a group jump, predominately for photo and video purposes. The second time was just as scary as the first, and as I hit the water my jaw slammed together, cutting the inside of my mouth. As we swam to rivers edge, I noticed that Ed was struggling to swim, appearing to have been winded from the jump. As I selflessly helped him out of the water, in spite of my painful top lip, it became apparent that he may have done slightly more than just wind himself. As he lay on the rocky shore, every now and again attempting and failing to stand, concern mounted as the situation gradually grew more serious. After 20 minutes of a slowly deteriorating condition, an ambulance arrived, shortly followed by the Westpac helicopter. After explaining to several different emergency service workers what had happened, generally followed by a tutting and shaking of their heads, we decided to forgo the deep water soloing activity in light of recent events, replacing it instead with skimming stones. As emergency crews knelt over Ed, preparing him for a heli-evac, we busied ourselves scouring the shore line for suitably skimmable pebbles.  A brief skim-off then ensued, quickly highlighting my inability to bounce stones over water, and bringing out several other people’s competitiveness at what I now considered a trivial task of bouncing stones over water. As morphine coursed through his body, we helped stretcher an upbeat Ed into the chopper, who was (thankfully) reiterating his request not to cancel the rest of the day’s activities, and to continue on without him. With the sound of the rotor blades disappearing into the distance, we shrugged our shoulders and retired for breakfast. 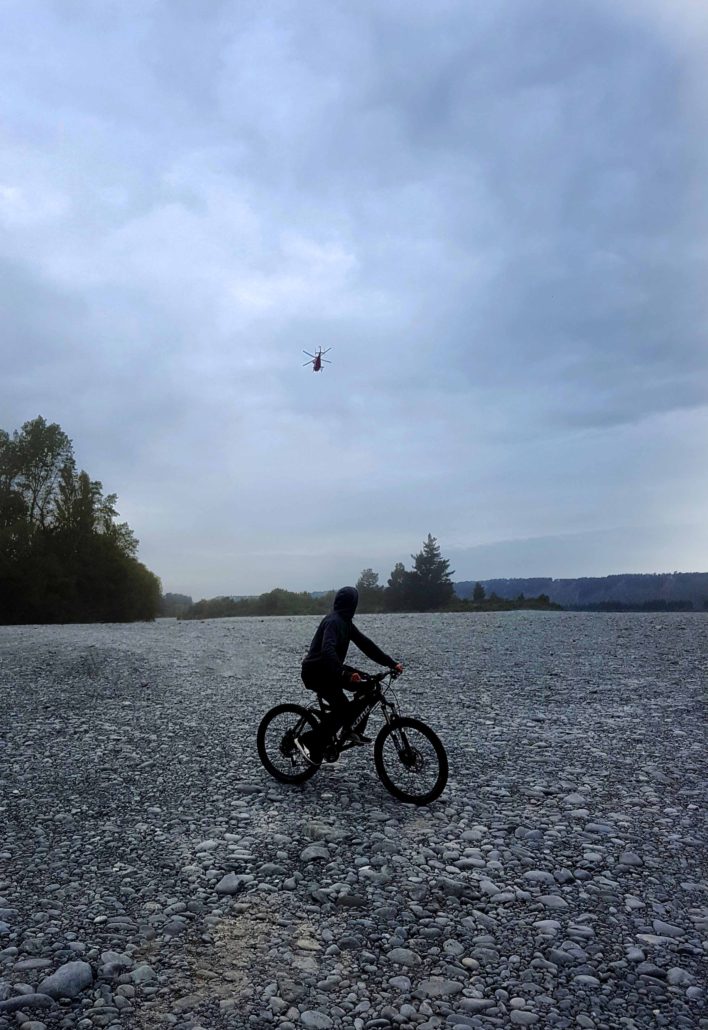 Once we had packed up camp it was onto Mt. Hutt. There are a number of bike trails that litter the mountain side, and are best accessed via shuttling bikes to the top, while taking it in turns to drive down. I originally had grand plans for doing several runs, but due to the earlier inconvenience we revised our intentions to a single run from top to bottom. As we ascended the Mt. Hutt ski field access track, the view over the Canterbury plains, with its patchwork of greens, stretched out to sea. Cycling the short, rocky climb to the start of the Scott’s Saddle Express trail, we then set off on a blast down the mountain, whizzing around corners and rattling down the straights, for a good 20 seconds before Adam got a puncture… which resulted in us hanging around making small talk for 10 minutes… before we were off again! The adjectives continued to fly as we negotiated our way through jumps, drops, rocks, roots and berms. With only several crashes to be had, most of which were mine, we made it to the bottom without heli-assistance, and the third activity was in the bag. 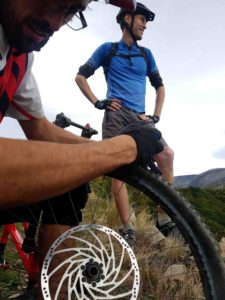 The first stage of the day was now completed. Admittedly, things may not have gone exactly to plan, but the afternoon was fast approaching and it was time to drive to Charteris Bay for the second phase. As I drove through the endless, flat Canterbury landscape, I couldn’t help feel that, from a literary point of view, it would have been more convenient if Ed had injured himself at the end of the day, as it was unlikely we would top a helicopter incident this afternoon. The account of the day was going to be front loaded, with all the drama before breakfast. I tongued my cut mouth, which was still painful and starting to swell somewhat. I’d mentioned it several times while we were biking but no one seemed to care. Maybe it’ll develop into something noteworthy by the end of the day, I mused, to help keep the level of drama up. My train of thought was broken – terrible pun intended – with news of Ed’s condition. He had a compression fracture on his T12 vertebra, requiring surgery to insert several bits of metal plate in and around his spine. The surgeon had mentioned before the surgery that ‘most people we see with this injury aren’t moving their legs ever again’. I returned to tonguing my top lip. 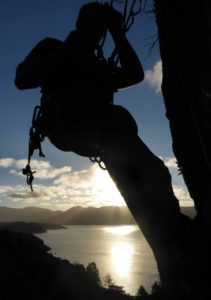 Rock climbing was planned for a crag known as The Altar, located adjacent to Charteris Bay, whose name seemed apt considering the day’s previous events. The spot consists of a large over hang, complete with spectacular views over the estuary and the rugged Port Hills in the distance. The area also doubles as a sun trap, and sunshine poured in as we set about putting some ropes up. As none of us were actually able to do any of the higher grade, over hanging, hard as nails routes, we instead opted for the more palatable and conquerable lines, affectionately known as ‘the easier routes’. Enjoying our time in the sun, we casually took it in turns attempting to scale the limestone rock face. I basked in the warmth of the afternoon glow, enjoying the fact that we were ahead of schedule and were in no rush to make it to the final activity. That was, until I nonchalantly glanced at my watch and saw what time it was. Jumping to my feet and pulling the sombrero from my head, I began barking orders: ‘The sun is setting and we still have pump track racing to complete. Let’s move people! Come on, come on!’. Now we were back in familiar territory.

Our final event would be at Orton Bradley Park, also located in Charteris Bay. Seeing as we had had an action packed day full of drama, activities and long drives, it seemed only fitting to save the most energetic sport to the end. We still had the mountain bikes with us from the earlier session at Mt. Hutt, so our list of activities was to end with a number of racing variations around the pump track. Nestled between the forest and a large grassy area, the gravel pump track completes a small, bumpy loop, with plenty of space to sit on the grass and shout encouragement. It didn’t matter whether it was Time Trial, Pursuit or Le Mans, I was terrible at them all, as fatigue from the day was starting to creep in.

With the sun now firmly below the horizon, we retired to Steve and Jackie’s house at Charteris Bay, for a victory BBQ and time to reflect on the day’s activities. The subject of risk and reward was discussed at length. Was the bridge jump any riskier than driving between the activities? Is risk assessment subjective or objective, based on an individual’s perception? Was Ed just unlucky? I considered mentioning that my mouth still hurt at various points during the conversation, but thought better of it. 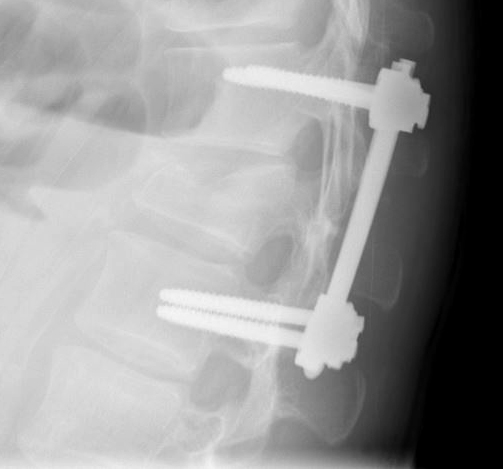 That’s Right Pete, it is
Scroll to top