My eyes scanned a third weather warning update in as many weeks. They were starting to become a regular feature this winter, a disruptive front of wind and rain that left a trail of closed roads, high river levels, and topped up ski fields in its wake. My heart sank as I got to the bit about it hitting Hanmer Springs – Friday night, through to Saturday. This was the exact time we were planning our third Mega Multi Sport Day. As is now becoming tradition, at least until I run out of ideas, every couple of months I throw together a new plan to complete as many activities as possible in one day. As well as getting everyone together for a bit of an adventure, it usually results in an entertaining story I can write about; whether it’s stubbornly going ahead in spite of a downpour, or getting airlifted to hospital with a broken back.

The setting for our third attempt would be Hanmer Springs, a quaint alpine town located in the Hurunui District of the South Island, New Zealand. Our list of activities would be as follows: skiing at the little known Amuri Ski Field; mountain biking in Hanmer Forest; hiking the Waterfall Track; tucking into a communal roast dinner; and finishing the day off at the thermal hot pools – and yes, a roast dinner does count as an activity. The emphasis of the day would be on enjoyment. Not to imply that the previous two attempts hadn’t been fun, but they had been quite time driven, requiring us to complete activities within a certain time limit to allow us to get everything in. This time I was hoping for a more chilled and relaxed day, hence ending with a roast and thermal dip. News of the impending front making its way up the country was concerning, as it would effectively kill a number of the activities, potentially reducing the plan to ‘Mega Roast Dinner and Sit in the Thermal Hot Pools Day’ – which in fairness, wouldn’t have been a total disappointment. 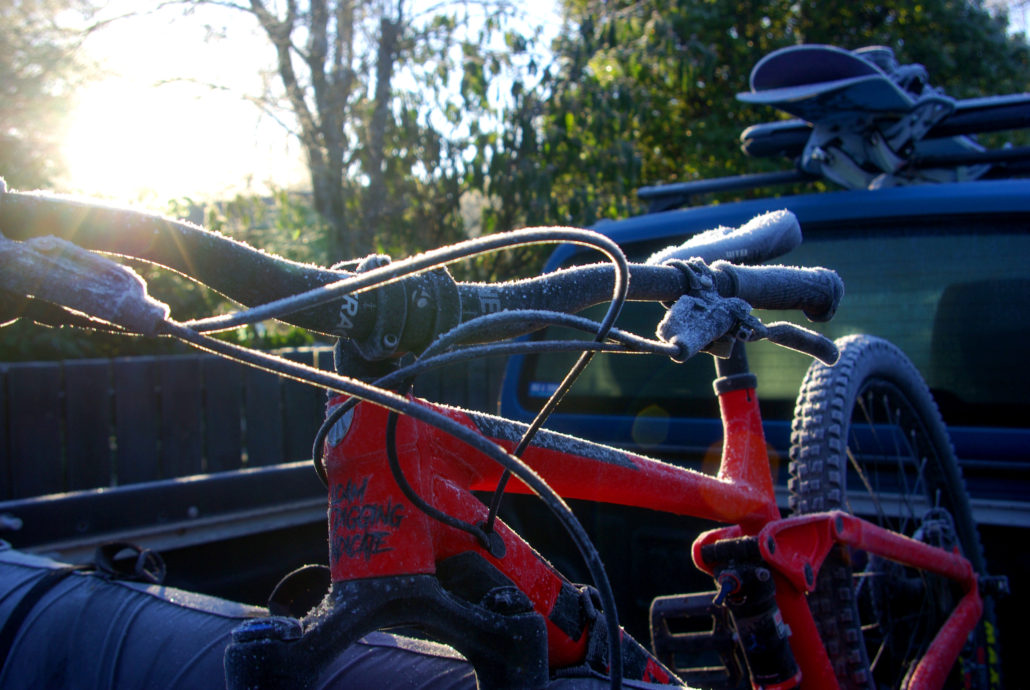 As predicted, the rain made its wet way up through the country, but a lot quicker and less devastatingly than first thought. Opening the curtains early Saturday morning to the expectation of a flooded Hanmer with the four horsemen of the apocalypse rowing past in inflatable dinghies, we were instead greeted with a cloudless, rich blue sky. It wasn’t long before the cars were packed with skiing gear and we were driving icy, snow covered roads towards Amuri Ski Field. The earlier front had left several inches of snow on the landscape, turning the St. James Conservation Area into a winter wonderland. This was excellent news for skiing, but terrible news for actually getting to the ski field. Arriving at the car park, it suddenly dawned on us that our mates weren’t close behind. We patiently waited. And then waited some more… but there was no sign of them. Other cars started arriving. This wasn’t good. We waited a bit more, but to no avail. Finally, we realised that we had no choice. We were a team. Never leave a man behind. All for one etc. etc. So I got the drone out and had a look. Flying it over the ski access track, we soon located our comrades, attempting to push their skidding car up the track. Oh, how we laughed from the comfort of the warm ski lodge, as they threw lewd gestures and snowballs at the drone.

They took their time, but eventually they made it to the little used ski field. It was mid-morning, and there were only a handful of ski tracks visible on a mountain that currently had half a metre of fresh powder residing on it. This was going to be epic… if I could just get to it. For those of you unaware of what a rope tow is, imagine a thick rope being pulled up a mountain by a series of burly, spandex clad men – the sort of types who attend tug-o-war competitions. The stout men pull the rope through at a constant rate, so you need to hold on with one hand as you get up to speed, and then clip on to the rope using a twisted bit of metal that you hold in your free hand. While this is happening, the sturdy men will whip and wave the rope around randomly in an attempt to knock you off. If you’re able to cling on, then they will do their best to dislodge you as you pass each of them, such is their dislike of snowboarders. If you’re lucky enough to make it to the top, unlike me, then you’re rewarded with the twisted metal attachment pinging off the rope and potentially hitting you between the eyes, if you’ve been foolish enough not to attach it properly. 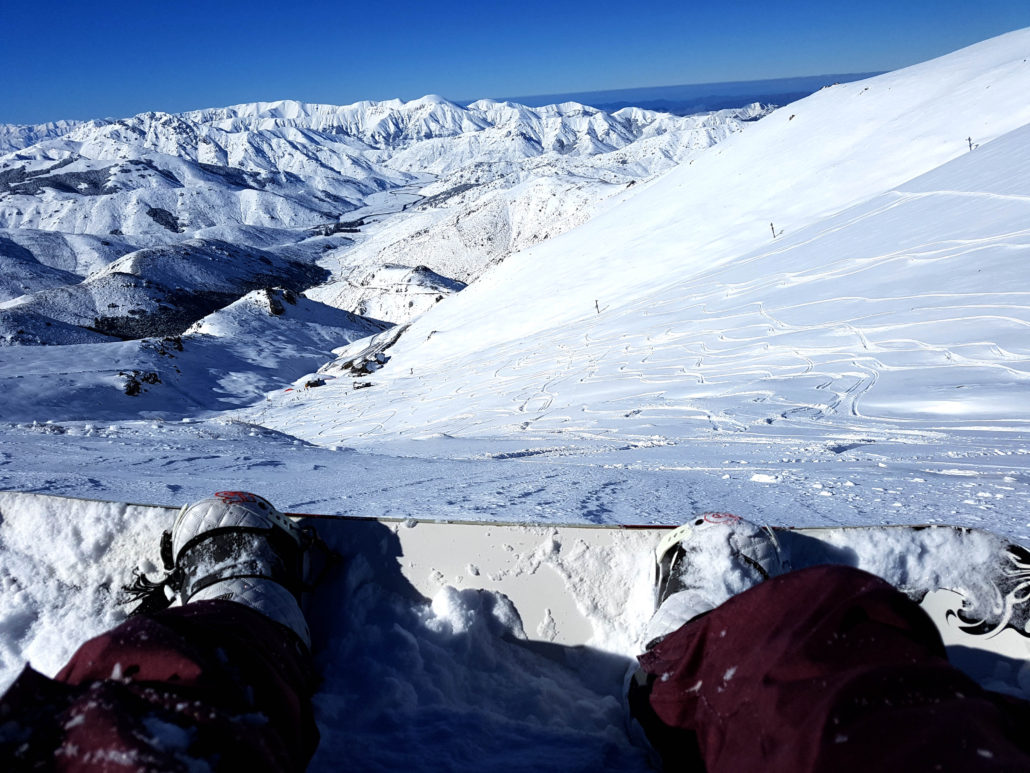 Matt and Alex, the skiers in the group, casually rode the rope tow to the top, laughing and joking with the hunky men. Kat and I on the other hand, who were also the snowboarders of the group, battled against these stubborn gate keepers until, thankfully, the rope tow broke down. This left us with the option of calling it a day, or hike the short distance to the top of the mountain to get one run in. And so began the incredibly underestimated, sweaty, arduous slog to the summit. The panoramic views slowly increased in immensity as we ascended, step by slow step to the top. Forty-five minutes later, out of breath and soaked in sweat, we dropped in on what would be, at best, only a two minute run to the bottom. As it turned out, it was awesome. Making new tracks through soft, knee deep powder, suddenly all the clichés of snowboarding came true, such as the feeling of floating and whipping up fluffy white powder with every turn. Falling over was a joy, similar to falling from a great height into an open top truck stuffed full of marshmallows, unicorn fur, rainbows and happiness. For those two minutes, I never regretted taking up snowboarding over skiing. Whether that makes up for the previous two seasons of hardship and toil learning to board is yet to be seen, but I still smile when I think about that single, short run.

Arriving back at the ski lodge, grinning and high fiving, it quickly became obvious that that we had spent far too much time at the ski field. By the time we got back to Hanmer, had some tea (we’re predominately British don’t you know), had lunch, had some more tea, and got our gear together, it was mid-afternoon, and conversation was starting to focus on whether to spread the activities over the weekend instead.

Now, I have had a few conversations about how to write this. I was originally going to stay true to the ‘day’ part of ‘Mega-Multi-Sport Day’ and just lie, because, you know, how would you know? But then the risk of potentially being found out, and the embarrassment of someone spotting continuity errors in the video montage wasn’t worth it. So in the spirit of being truthful, I should probably point out that rope tows are not operated by several robust men. They are actually run off a diesel engine and a number of pulleys. There we go, full disclosure. We revised our plans so that the biking and hot pools would be on the Sunday. This meant that we could enjoy the roast without being rushed, and get our money’s worth at the pools. Unbeknown to us at the time, it also meant that we would have an awesome time sledging in a boat, and being towed on skies by a car, but we’ll get to all that. 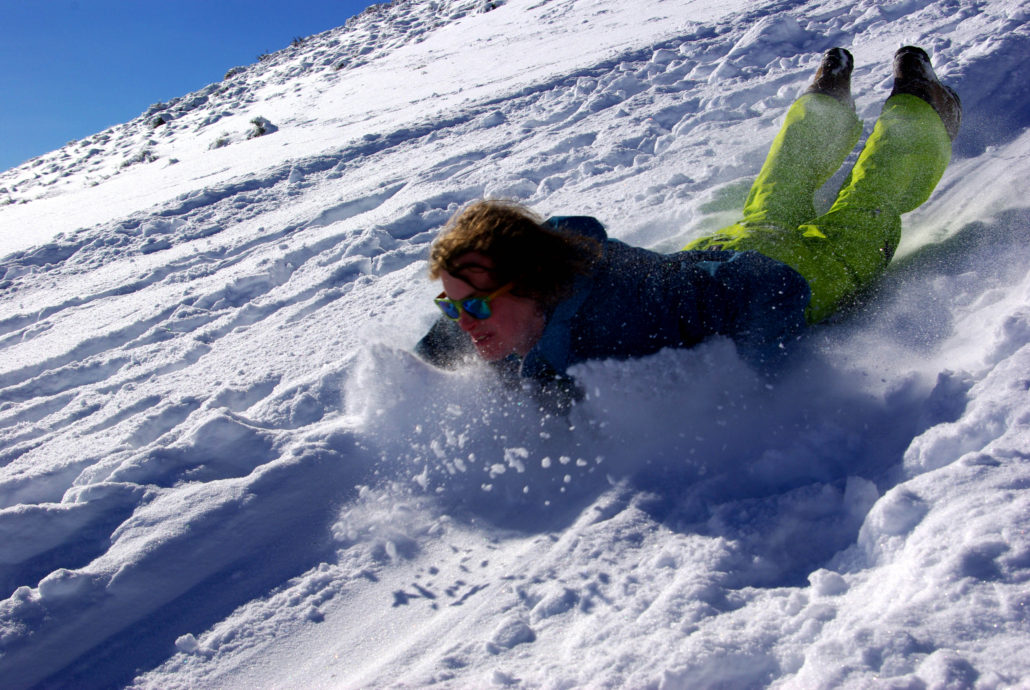 As late afternoon approached, we arrived at the start of our second activity, a 2.5hr walk along the Waterfall Track that would take us to, well, a waterfall. It also allowed us an opportunity to walk the dogs, which was good for the dogs, possibly less so for anyone in the group who wasn’t partial to the sound of constant barking, or distractions when you’re trying to negotiate a steep, icy slope. Where we reaped the benefits of a fresh dump on the ski slopes, we paid for it on the walk. What should have normally been a straightforward walk in the woods, became an exercise in skidding, sliding and arm waving, as we slowly made our way towards the waterfall. On the plus side, it was lovely and picturesque. The setting sun cast purples and reds across the sky, framed by the white of the snow in the trees. Returning to the cars was a similar experience to walking in, except the barking and meandering dogs were replaced by cold and darkness.

The roast was splendid, thanks for asking.

A new day brought more blue skies, more frost and more good times. Venturing back into St. James Conservation Area, our morning activity would involve a trip down memory lane. To a simpler time before responsibilities, financial worries, or doubts at making a career from full time writing. It’s amazing how sliding down the hill on a plastic bag, or the lid of a box, or in this case, a toy boat that we found in the bach, can take you back to childhood. It appeared that sledging without a smile on your face was physically impossible. An oxymoron if you will. Like a Kiwi opening a beer bottle with a bottle opener.

After many, many nostalgic trips down the snowy hillside, things then escalated when Matt looked at his skis. Then at the truck. Then back at the skis, and asked, ‘Do we have a rope?’ And thus car skiing was born. A morning full of smiles continued with me waving to Matt as he skied up alongside the driver’s side window, all the while being towed along by the truck on our way back to the bach. 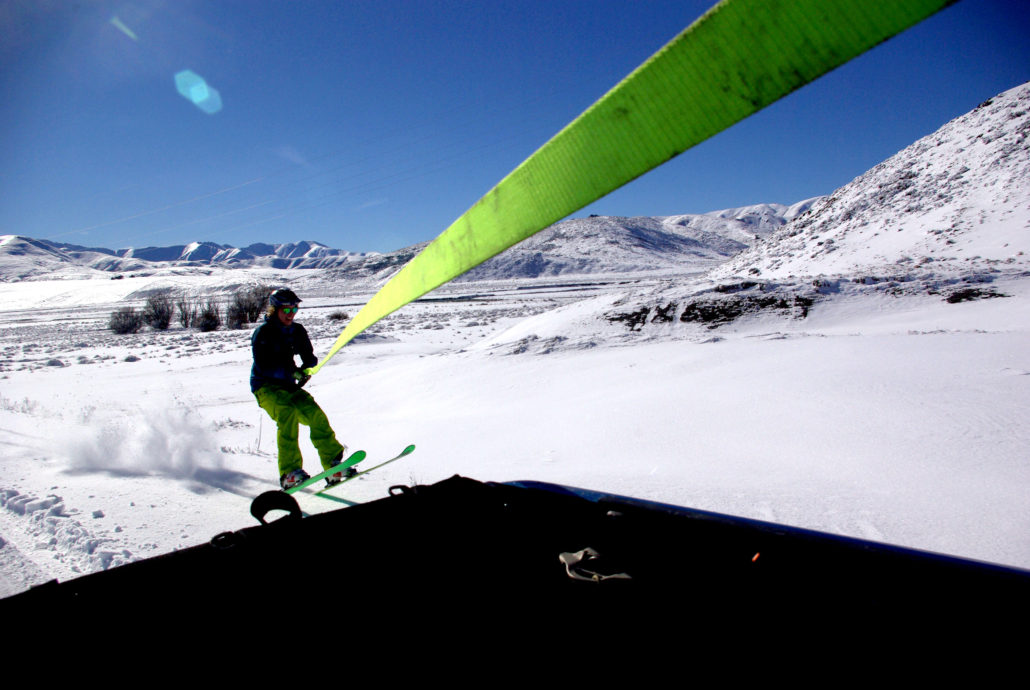 Arriving back at mid-day, we had just enough time for some lunch, tea, homemade carrot cake and more tea, before setting out on the mountain bikes. Unfortunately, this activity was a bit of a non-event as most of the trails were closed. Within an hour we were back at the house, just in time for another round of tea.

It was now mid-afternoon, and the hot pools were calling. My hope that the crowds would have thinned by 3pm on a Sunday was instantly dashed seconds after paying the entrance fee. Reliably busy, I have a bit of a love / hate relationship with the pools. Yes, it is nice to be in warm water, and I appreciate the increased level of freedom over my bath tub at home. However, sharing that same warm water with several hundred other people does taint the experience somewhat.

The activity was nice enough, essentially swapping the experience of hanging out with your friends and drinking tea, with hanging out with your friends, and many strangers, in warm water. All that said, it was a nice way to end the weekend before we headed back to Christchurch. Relaxing in the sulphur infused water, we reflected on the weekend’s fun. We had experienced our first proper New Zealand powder day, and been taken on nostalgic trips back to our childhood. Yes, I was disappointed about not getting all the activities completed in the one day, but if that was the worst thing to have happened over the weekend, then it was a worthy trade off.

For the a cheeky montage of the weekend, click here: https://youtu.be/CU0pXHJ2I2A 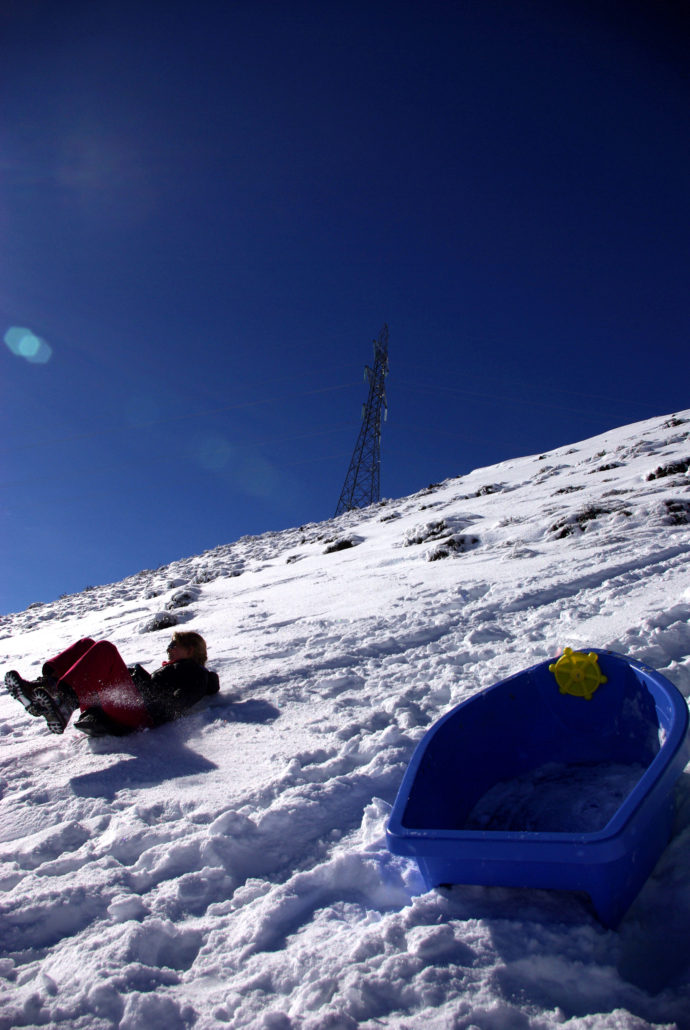