Recently… well at the time of writing anyway, a new mountain bike trail was completed on the West Coast of the South Island, New Zealand known as The Old Ghost Road. The trail had originally existed as an old gold mining track from back in the day,  however it was not possible to cycle all the way through and the rides tended to involve a cycle in/out on the same route (either from the non-existent town of Lyell or from the other end at the may-as-well-be non-existent town of Seddonville). Much like the gold mining boom of this area, times have changed and it is now possible to cycle right the way through on what is a 2 – 3 day, 85km spectacular trail.

As a mate and I were in training mode for a multi-day bike race, we decided to attempt to ride the whole thing in the one day. We really needed to up our game as race day was approaching faster than our fitness levels were improving. We left Christchurch Friday evening and drove the four hours to Lyell where it is possible to camp right at the start of the trail. The first and last thing you notice about Lyell is that it consists exclusively of a camp site and the beginning of the trail head. If you want to be generous, then you could also include the swarms of sand flies and rumours of a cemetery somewhere nearby, but that’s it. Once we arrived we sorted our tents and got some sleep, excited about the prospect of the ride that lay ahead the following day. 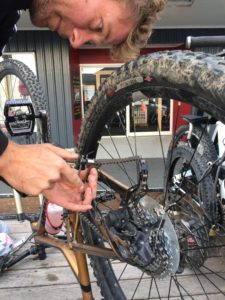 Before – twisted derailleur and look of concern

That excitement was to last all the way up until I got onto my bike the following morning when I took one pedal stroke and managed to twist the rear derailleur out of use. Somehow the chain had been knocked off the back of the cassette and pulled the derailleur off with it, accompanied by a horrible, crunching noise. I jumped off the bike, inspected the damage in dismay and announced to my mate that I wouldn’t be riding today. Calm headed as always, my mate wandered over replying ‘wait there, let’s see what the problem is’, took one look at the mangled derailleur and went ‘… yep, you’re not riding today’. Some frantic discussion and much arm waving later, we decided on driving 45 minutes to Wesport, the closest town, to see if they had a bike shop I could throw money at to try and solve the problem. Three and a half hours later, $250 and a box of beers for the friendly bike shop mechanic, we were back in Lyell with a shiny new rear derailleur on my bike and ready to finally start the ride. 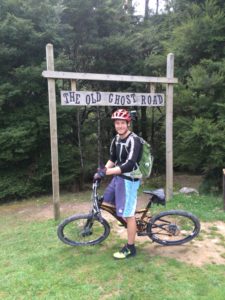 After – shiny new derailleur and look of happiness

After the mornings drama, we were both keen to get onto the trail and start making some progress. It appeared that progress was going to be slow however, as the first 30km of the trail is of an upward gradient. The trail climbs gradually enough through the forest, with the occasional viewing point and historical bit of rusted, ambiguous machinery that somehow related to the extraction of gold in the area. For good or for bad, depending on your emotional state at the time, each kilometer is marked along the trail. So you can literally count each 1000 meters that you cycle. So when you’ve got a good pace going on it can be a real morale boost as you metaphorically crush each marker. Equally, each marker can be a kick in the balls when it takes forever to get to the next one. It can feel at times like the markers are going backwards as you begin to fatigue and sink into an emotionally negative slump. There were times during the ride where I wanted to literally crush each marker into oblivion and remove them from the face of the earth… we’d only been on the trail for an hour and a half and I was already getting dramatic.

Finally, we made it above the tree line and popped out onto the ridge. When you look at brochures for the Old Ghost Road, they proudly show a photo of some cyclists biking along the incredible ridge line with panoramic scenes surrounding them. Well for once the marketing was actually representative, and expectations were met and then pleasingly exceeded. Riding along the ridge line is a little spicy in places and a wrong move could result in a tumble off the mountain side, but for the most part you spend the section of the ride blown away with the views and sense of exposure as the scenery extends in all directions. It’s just brilliant and easily justifies the 3 hours of ascent and extensive plotting of how to torture and destroy every single kilometer marker. The ridge line ends at Ghost Lake Hut which may be the most epic-ly located hut I have ever been to. Had we been riding the trail in the recommended 2 to 3 days then spending the night at the hut would have been amazing, but we weren’t even half way through yet and still had a lot more riding to do. We refueled, took some obligatory photos and embarked on what was going to be possibly the worst part of the day for me. Worse than the derailleur detaching itself from my bike or the increasingly itchy sand fly bites that I had accumulated at the Lyell camp site.

The brochure was right!

Leaving Ghost Lake Hut, I rode for a good minute and a half before my first fall off the bike. Note that it wasn’t a crash, as that would imply that I hit something. No, this was far more embarrassing. Today was the first time I was riding with clips, a means of attaching your feet to the pedals, requiring an initially unnatural twisting of the foot to release said foot from said pedal. It takes a while to get used to this new release method and normally I wouldn’t have used the pedals for the first time on an unknown trail. But as race day was approaching I needed all the practice I could get, which unfortunately meant having to go through the rites of passage with comical, yet painful falls off the bike when losing your balance and being unable to unclip your foot before falling off. Which is exactly what happened soon after leaving the hut; whilst negotiating a hair pin corner, I lost my balance and with the feet still clipped to the pedal, tumbled off the side of the bike to the hilarity of my mate and much inflicted pain to myself. It was then, after getting to the top of a small climb we could see the trail snake its way down the valley via a succession of steep, tight hair pin turns. My heart sank at about the same rate that my mates grin grew as I suddenly became aware of the gauntlet I was about to have to run (I should also point out that my mate isn’t being mean here. Several weeks earlier we rode the Wharfedale bike circuit where he was just getting used to clips for the first time. The circuit has a load of river crossings which he ended up falling into while attempting to ride through and lost his balance. Much to my entertainment and piss taking. So the dozen or so switch backs that awaited me was just the universe re-balancing for all the laughter I enjoyed at his expense).

It was horrible. I struggled with every corner, convinced that each turn was going to be the one that I messed up and would result in me bouncing down the mountain side, still attached to the bike. After a few skids and tumbles we made it to the bottom of the trail, and at that exact point in time I was ready to add the clips to the burning pile of kilometer markers. I had lost all confidence in my biking ability and any remotely technical looking sections, say a tree root across the path or a menacing looking bird perched high above me pretending to look innocent, would be enough to reduce me to walking the bike. This continued along a smaller ridge line with equally epic views, although somewhat diminished by my current emotional state, until we descended some steps (which are provided with a slightly defensive sign providing the reasons why the trail builders opted for steps over trail, the short version being ‘Safety’); then hit flatter ground, where I had an opportunity to regain some dignity and confidence and start riding the bike again.

We were now beginning the final climb of the trail, which depending on which trail profile map you used, was either a minor bump or a gruelling climb depending on the scale – a detail I’ve been caught out on a few times! We entered the ‘Bone Yard’ which sounds worse than it is. It’s basically a bit rocky and barren which normally would have been fine and quite interesting, expect for the fact that fatigue was starting to set in, along with exposure to the sun. There’s no shade through the Bone Yard, and we found ourselves drinking litres of water to try and compensate for the heat as we pushed our bikes to the top of the summit, kicking over kilometer makers as we went. Sweaty and tired, we rolled down the other side of the hill and onto the final section of trail affectionately known to locals as ‘The Suicide Bluffs’. The trail follows the river Mokihinui out of the valley along twisting and turning trails. Although some turns are provided with a makeshift barrier to stop you falling off the large drop to the river below, there are plenty of other corners that would have benefited from a bit more Health & Safety legislation. Maybe it was due to it getting dark, or riding for nine hours, or having drunk roughly 12 litres of water, but I started to have visions of me hitting some rock, being unable to regain my balance due to my clips, and falling off the edge of the trail into the river below. It was actually quite a terrifying way to end the ride, and coupled with the slow puncture I had recently acquired within the last 10km, the bike felt a bit more unstable as the rear wheel bounced around behind me. 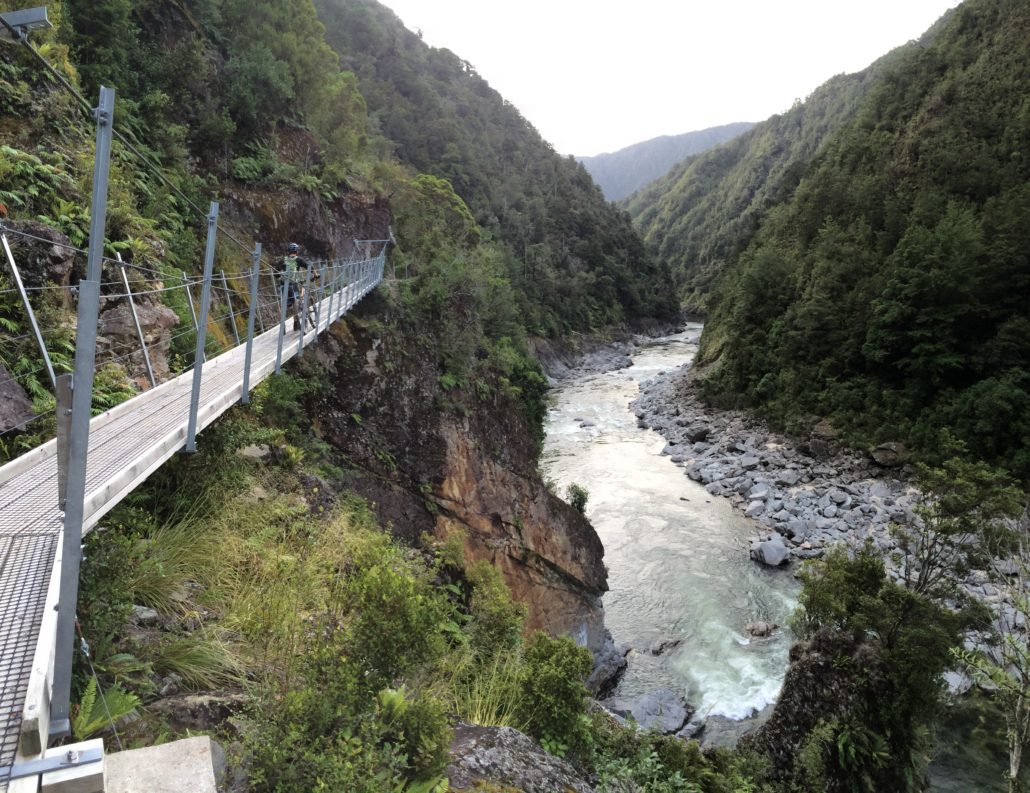 Descent into the ‘Suicide Bluffs’

Arriving at the end of the trail 9hrs after we had started, it was a nice relief that I had survived bike failures, clips, switch backs, heat exposure and large scary drops into fast flowing water. It is only in retrospect that I realised the slight morbidness of this article, which seems suitably fitting seeing as the trail is littered with equally morbid references: Old Ghost Rd, Ghost Lake Hut, The Bone Yard, The Suicide Bluffs. Man it feels good to be alive.

Braving the Gorse on Mt. Bradley

West Coast Wilderness Trail… Minus the Wilderness
Scroll to top