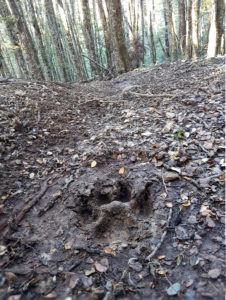 I bounded over fallen branches and spindly, green vegetation. The tall, skinny trees passed me as a blur, as I ran deeper and deeper into the forest. The scent I had detected was becoming clearer and more pungent as I homed in on the source. Finally, after all these hunting trips, I was able to showcase my ninja-like hunting skills, and prove to Rusty that the ‘Hunt’ in ‘Huntaway’ was completely justified. Rotten branches exploded under paw, and a loud rustling echoed through the trees, as I landed in a clearing to come face to face with… nothing. Just an empty, grassy clearing, enclosed by moss covered trees. I looked around, confused. I was convinced that this was where the scent was coming from. Rusty, the ever-annoying Labrador would once again put the ‘La’ in ‘laughing at me’ at my inability to catch anything. I took a moment to concede that the ‘La in laughing’ comment didn’t really work on any level, and then begrudgingly turned around to join the others.

Positioned within the centre of the circular clearing, I quickly realised that I had no idea which direction I had arrived from. The surrounding trees and undergrowth all looked the same, acting as a barrier to the shaded forest behind. ‘Not to worry, I’ll just follow my nose’, I smirked to myself, and looked around to see if anyone else got the joke, confident that it was an improvement on the previous attempt. Remembering that I was on my own, I instead raised my nose into the air, attempting to detect the stench of Ian’s tuna fish sandwiches, or the condescending aroma of oxidised iron. Smirking to myself yet again from a joke at Rustys expense, and again remembering I was on my own and no-one was here to witness my return to comedy form, my smirk turned to concern as I could detect neither scents. It started to dawn on me that I might be lost…

Several hours earlier, Ian, Rusty and I had arrived at the Mt. Cheeseman ski field access road, located in Craigieburn, 1.5 hours’ drive from Christchurch. It was another fresh day, with blue skies, no wind, and a radiant sun hanging high above us. Parking at Texas Flat – which is a bit of an odd name I know – we would the walk up the Cheeseman access track – which also is a bit of an odd name, I know – and then turn off onto the newly signposted Cuckoo Creek trail – I’ve heard worse names – and return via the Dracophyllum Flat track – it’s a native New Zealand plant before you ask. 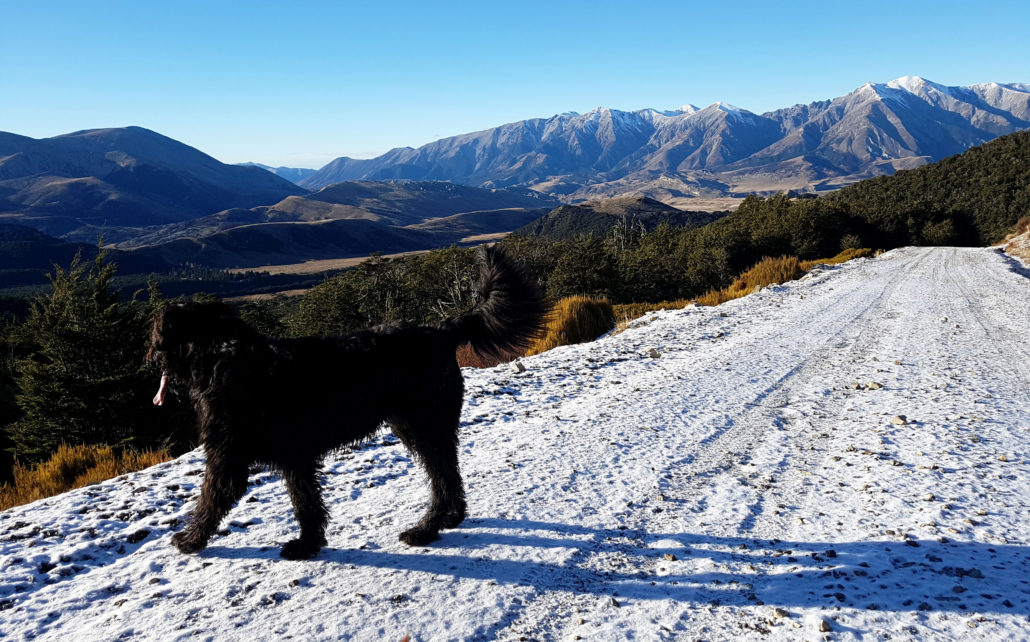 The access track was typical of most access tracks, a winding rocky road that gradually made its way skywards. While Ian busied himself photographing every possible angle of it, Rusty and I inspected a new type of medium under-paw. Not quite snow, and not quite frost, a glassy film coated the road in several places still protected from the sun’s rays. It would either shatter with a satisfying crunch under our weight, or instead provide entertainment as we watched, with our heads cocked to one side, as Ian attempted to walk across it, his arms flailing and shouting words that I shall not repeat here. The amusement was eventually brought to a close an hour of wobbly walking later, when we arrived at a signpost indicating the start of the Cuckoo Creek trail. 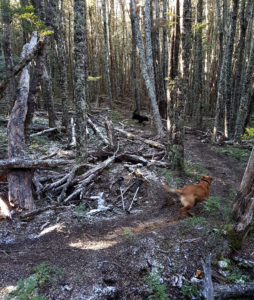 The trail abruptly dropped away from the road, and we were immediately immersed in browns and greens, as the squidgy, earthy trail disappeared into the woodland. White, crystallised frost lined the fallen trees and branches where the morning sun hadn’t taken affect yet, as slivers of light penetrated the canopy where it could, illuminating small patches of undergrowth. Rusty and I darted around, exploring this territory full of new scent and sounds. As our names were called, we returned to Ian, who was making his way along the slowly descending path, to collect another delicious Bitchin Beer Treat, before heading back out on our investigations, which so far were proving fruitless. After thirty minutes and 2km of this, we arrived at the Dracophyllum Flat track.

We turned right and headed back towards the direction of Texas Flat. A little disappointed by my hunting endeavour, I was close to giving up, but then detected a faint scent emanating from somewhere through the trees. I sprang to attention and sprinted off to track it down.

Now stood in the clearing, it became evident that I may have been a little too ambitious with the exploring, and I found myself in a bit of a predicament. Unable to hear or smell where Ian and Rusty were, I frantically looked around, attempting to recognise something that would lead me back to where I came from. I cast my mind back to the blur that was the forest when I was dashing through the trees, and it quickly became obvious that my memory was going to be of no help. As my nose was failing me, I stood still and held my breath, trying to make as little noise as possible while I flexed my ears to detect any Ian or Rusty related sounds.

I thought I heard something in the distance, coming from somewhere behind me.

‘God damn it. Where are you? Katrina is going to kill me’.

That was definitely Ian. There was only one person I knew who lived in such fear of his partner’s wrath. Suddenly I was able to detect the unmistakable smell of terror, as Ian’s sweat glands went into overdrive. Acting as a homing beacon, I chased the scent down to finally be reunited with a relived Ian, and a nonchalant Rusty. Re-joining the path exactly where I had enthusiastically left it several minutes ago, Ian immediately clasped a leash on me and we walked in silence, with a smug Rusty up ahead, walking with that annoying swagger that he does. 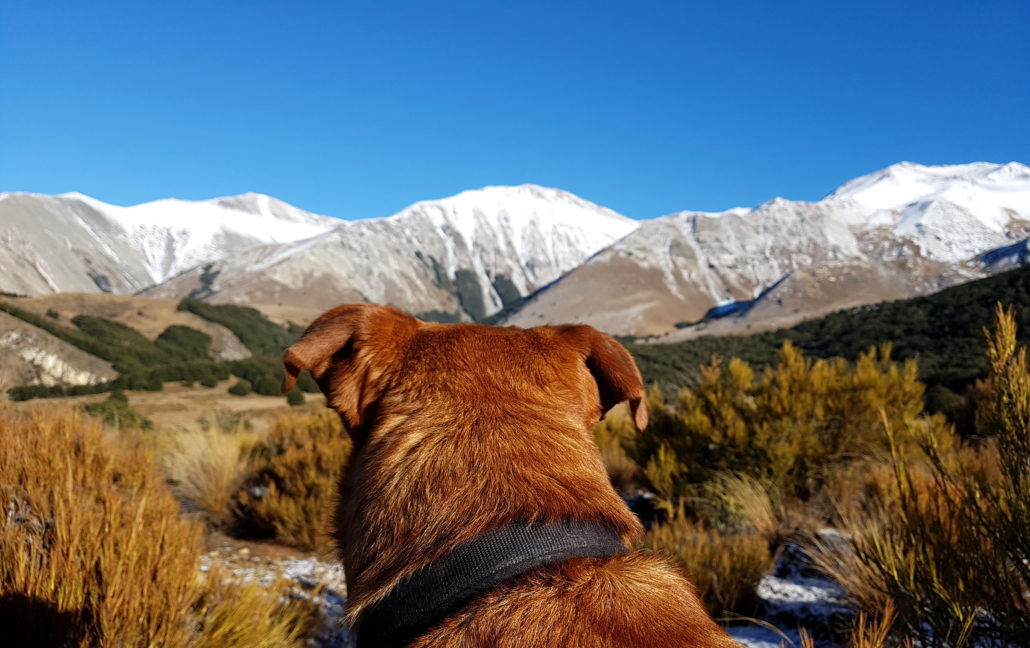 The remainder of the Dracophyllum Flat track climbed steeply out of the forest and into a grassy clearing, providing views over the surrounding mountains. By this point Ian had calmed down and released me from the leash so I could play with Rusty, as he spent several minutes photographing our every move. Which I will admit, was a little creepy.

The final obstacle before we made it back to the Texas Flat was crossing Tims Stream – I don’t know who Tim is before you ask. What should have been a straightforward exercise in fording a watercourse, was instead dragged out and complicated by Ian’s insistence of not getting his feet wet. Rusty and I stood, chest deep in the slowly moving water, with our heads cocked to the side once again, as we watched Ian pick his way over slippery rocks. Sadly not falling in, I was instead comforted by the fact that no matter how bad I think I’ve got it, Ian will always have it worse.

Route can be mountain biked in the Summer 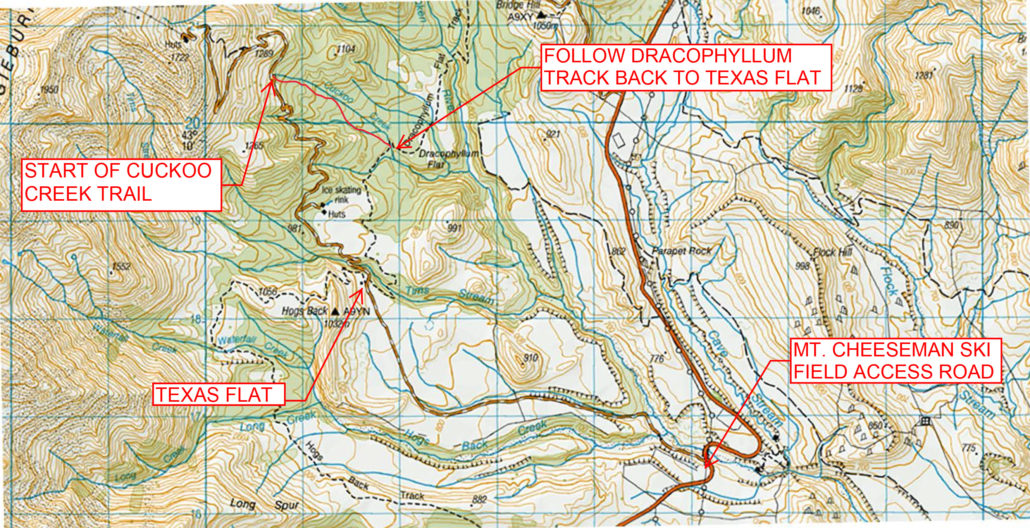 The Sounds of the Community
Scroll to top