Sat on the sofa, Ian continued to stare at his phone that was resting on the coffee table. He looked over at me, currently stretched out by the fire, and we locked eyes. His gaze then returned to the lifeless phone in front of him. This series of uninteresting exchanges continued for the best part of the morning, until he eventually reached out, picked up the phone and tapped the screen a couple of times. Holding the phone to his ear, a few moments passed:

‘Hello. This is the owner of the blue Nissan Nivara… yeah; I think I owe you an apology…’

Several days earlier, we were leaving an incredibly wet Christchurch, heading back to our stomping ground of Hakatere. In the front of the truck were Ian and Kat, who stared out at water violently bouncing off the windscreen. Every few seconds a wiper thing would scrape across the glass, momentarily clearing the view, before it quickly descended back into obscurity. Even for someone of little understanding of the world in my two years of existence, the wiping did seem a little futile.

As usual, Rusty and I were in the back. Rusty was curled into a ball, his tail wagging occasionally. I vacantly stared out of the drenched window, wondering why exactly we had decided to leave the comfort of the house. Occasionally Ian and Kat would have the same discussion, which normally ended with Ian saying ‘Well we’re out now’, and then going back to trying to work out exactly where on the tarmac the white road markings were. Things started to improve the closer we got to Hakatere, and soon grey clouds were replaced with white clouds, which were replaced with… fewer white clouds… and some blue sky.

Today we would be exploring a hut called Double Bunk. Located at the foot of Mt. Taylor, Ian apparently had grand plans of attempting the mountain, but wanted to see if it was possible to drive to the hut. Which again, I’ve only been around two years, but driving to a hut didn’t particularly seem to be in the spirit of things, but what do I know. 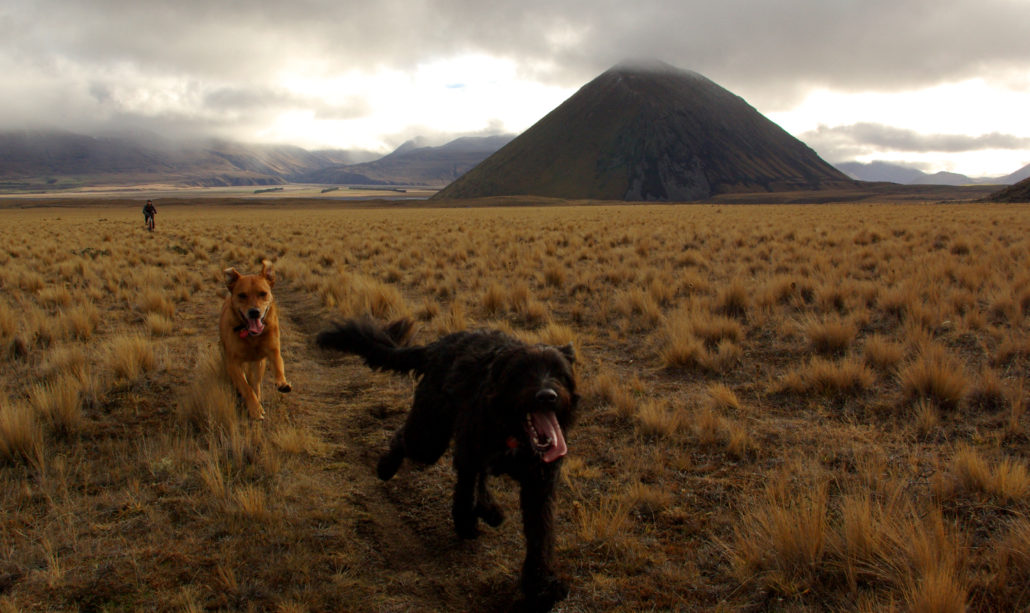 That, my friends, is what canine happiness looks like

Heading down the gravel road towards Lake Heron, we abruptly came to a stop. Ian looked at the map, then at an open gate on the right hand side, and then back at the map. He went to say something, but instead put the truck in gear, turned off the road and drove through the gate. The frequency of stopping, map checking and discussion between Ian and Kat increased the further we drove, and after negotiating a few fields, we arrived upon a new gravel road. The mood of the humans seemed to perk up at this point, and we followed the road for several kilometres, before we came to a stop and were released.

Ian and Kat unloaded the velocipedes (yes, if you have been keeping up with these articles you’ll notice that I actually know what they are called now. It’s amazing what you can find on Yahoo Search. On a similar subject, what the hell is Google?) and we set off along the Swinn River Track, marked by orange topped waratahs. With Lake Heron and Sugar Loaf Mountain behind us, we followed the brown trail as it gradually climbed through low lying shrub. Rusty and I scouted ahead, with Ian and Kat eventually bringing up the rear, proving that two legs and two wheels is no substitute for four legs.

It can be awfully bland out here at times

Arriving at a trail crossroad, we turned right, following the signs for Double Bunk. Shortly after embarking on this new bearing, we came across a small stream. Once again I am amazed at the lengths humans will go to not to get their feet wet. As Rusty and I walked back and forth across the stream, demonstrating that having wet feet really isn’t the end of the world, the humans attempted to build a crossing using various stones that lay around the river’s edge. Much rock carrying, rolling and throwing later, the humans were no closer to building a bridge, but were closer to having wet feet. Eventually giving up, they carried their bikes through, thus ensuring that a large proportion of the day would be spent listening to them bitch about how wet their feet were. The irony is not lost on the fact that we had twice as many wet feet, yet bitched about it half as much. 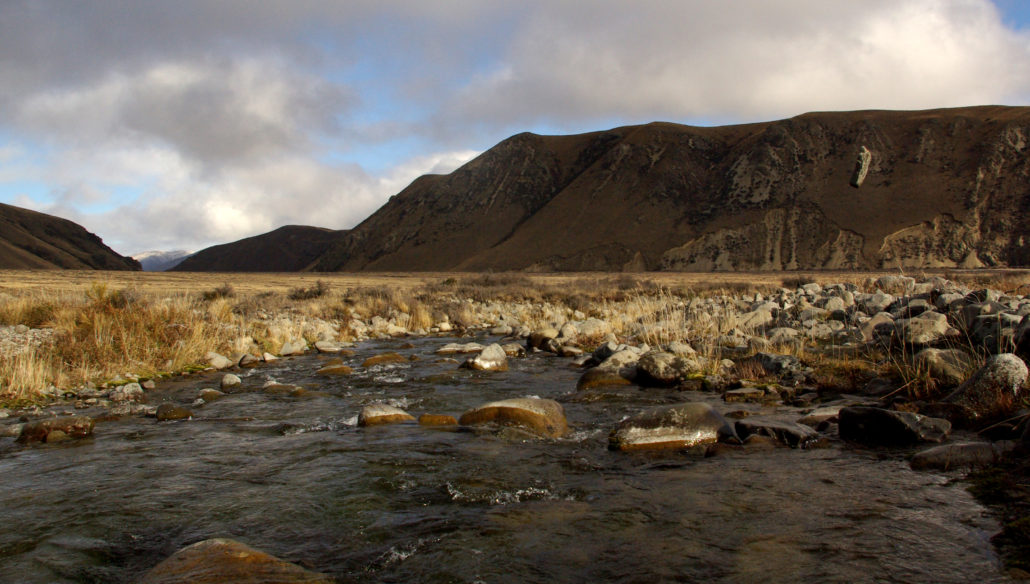 After another gradual climb through tan coloured tussock, with tan coloured mountains surrounding us, and regularly losing Rusty due to his tan colouring, it did occur to me that this place can be a little drab at times. Granted, there was the blue of the sky, or the white of the snow topped mountains occasionally peeking through the clouds, but I couldn’t help feel that the place could do with a bit of colour. Explaining this to Rusty on the way home, he pointed out that as us canines are colour blind anyway, what did it matter, which I felt was missing the point a bit. Sometimes I despair with that boy.

Anyway, after a short ride, we arrived at the hut, which unsurprisingly, was an uninteresting shade of light grey. The small wood lined hut sat within two spurs of Mt. Taylor, which crept down from the mountain like tentacles. Inside the hut there were six human sized bunks, a fire place and table, but no dog beds! Disheartened, I then noticed what I could only assume to be a kennel, adjacent to the hut. Typical. 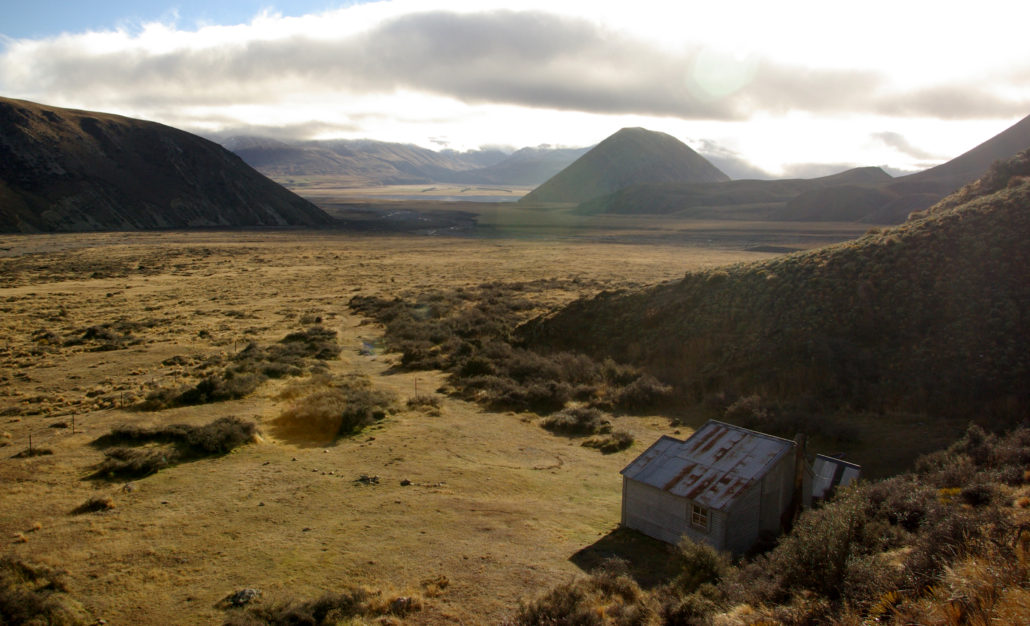 We sat outside in the intermittent sunlight and had lunch. Some awesome Bitchin Beer Treats for us canines, and some green, salad stuff or something for the humans. It was soon time to return back via the 4×4 track that would complete the day’s loop. All of the subtle ascending we had done getting to the hut paid off on the way back, as we cruised down the wide, grassy track towards the truck. Mt. Sugarloaf sat directly ahead of us, like the little volcano that could, with the shadows of late afternoon spreading across the mountains ahead of us.

Squelching feet and a lack of vibrant colour aside, it had been a good trip, I thought to myself, as we galloped back to the truck. We’d found a new place to explore, the weather had been kind, and Ian had another opportunity to shamelessly promote his Bitchin Beer Treats.

That was until we got back to the truck, and Ian found a note under his car windscreen.

Turns out we made a bit of a mistake getting to the start of the track, and drove through private property. Although the loop is in conservation land, and getting there is possible by public roads, check before you go. You don’t want to be making retrospective, apologetic phone calls to private land owners, like Ian had to.

This link is a good place to start: https://www.wams.org.nz/wams_desktop/index.html 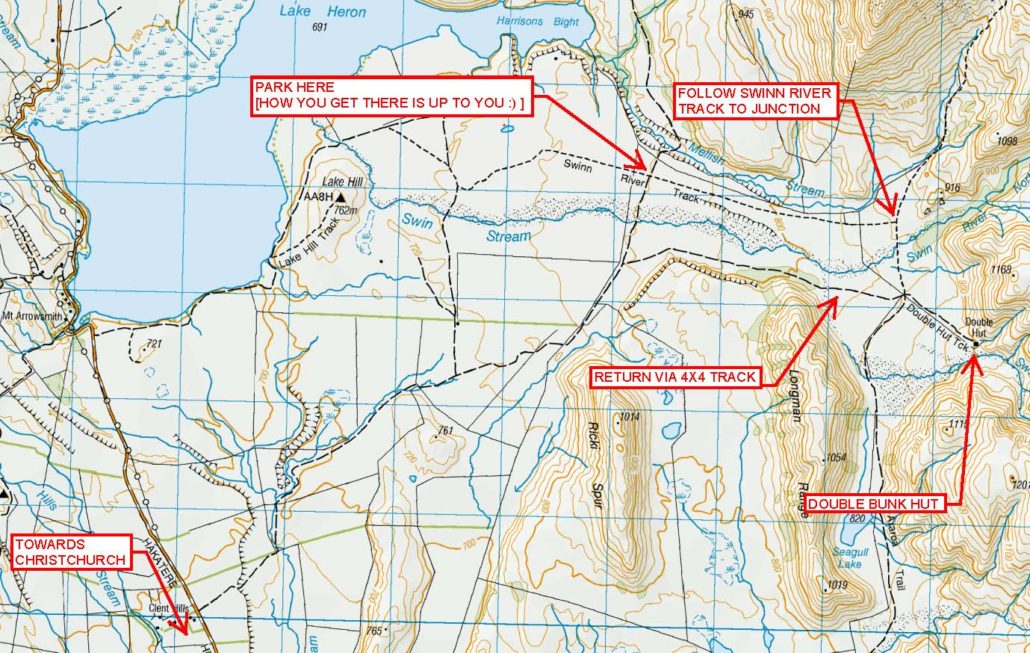