His silence said it all. He eyed me up for a few moments via the reflective glass thing, and then returned to staring at the endless grey strip with the intermittent white lines down the centre. The car we were travelling in had been gradually increasing in speed as the morning moved further away from the brunching hour. Although futile, I once again attempted to give my perspective of the morning’s events, via enthusiastic barking and tail wagging, but the human didn’t seem interested.

‘Yes, I will concede that we might be ever so slightly behind schedule because I wanted to do some shopping before we left Christchurch. And yes, I also accept that we may now not have enough time to summit Castle Hill Peak. But you have to admit, I do look awesome wearing my new dog bag. I mean seriously. Look at me!’

No response. Just a ruffling of his forehead and another slight increase in speed. It was like this all the way to Porters Pass, the gateway to the Craigieburn area, and our starting point for the day’s adventure. When the human (who goes by the name of Ian), was in a more agreeable mood earlier that morning, I overheard him explain the plan to the other human who lives with me (who goes by the name of Kat), that we were going to walk up Foggy Peak, and then onto Castle Hill Peak. Both mountains are located in the Torlesse Range, and are the first significant geographical features to be seen as you enter alpine territory. He went on to say that the walk would take a few hours and would provide some excellent views over the Canterbury Plains on one side, and the mountains of Craigieburn on the other. 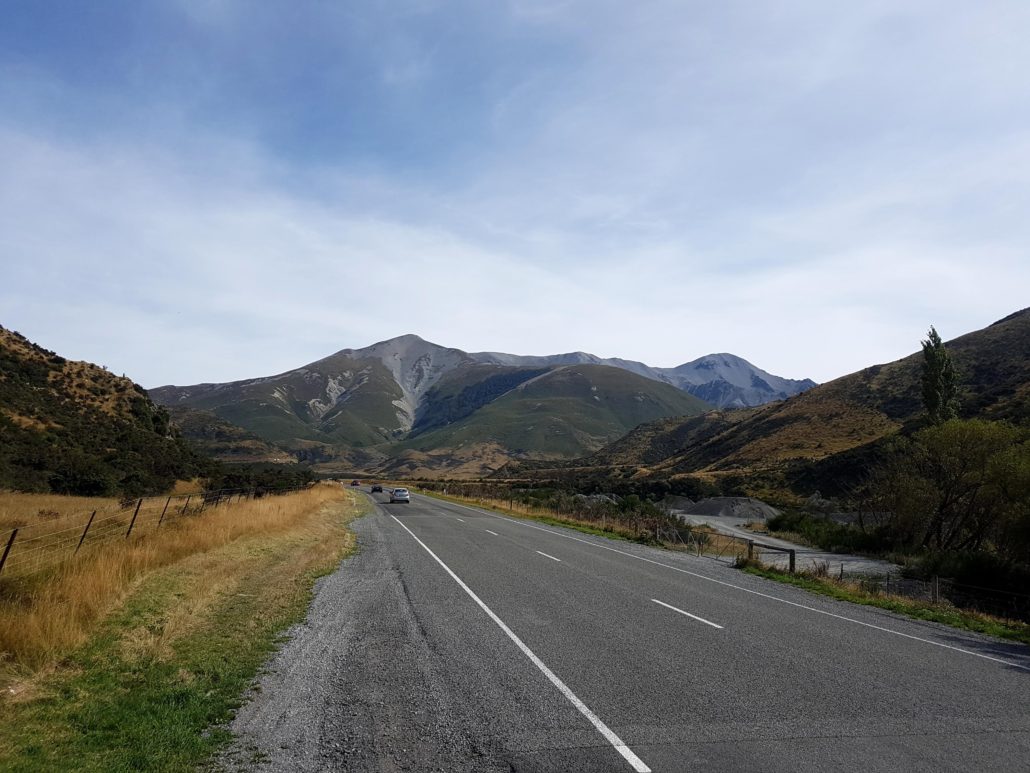 Foggy Peak directly ahead, with Castle Hill Peak on the far right

The car pulled into the lay by and skidded to a halt. I sat and watched patiently from the back seat, as Ian  began a series of fumbling manoeuvres that included packing, unpacking, sighing, then unpacking some more, and finally packing, before I was released, the car was locked, and we were on our way. I was currently sporting a smashing new rucksack that I had treated myself to that morning. Insisting that we called into an outdoor shop called ‘Further Faster’, which was on the way I might add, I wanted to kit myself out with a bag to carry my essentials in; snacks, chew toys, sanitary bags and the like. Being the more independent type, I like the idea of being a little more self-reliant on these little adventures the human and I partake in. So you can understand my resentfulness when I discovered that Ian had, spitefully no doubt, taken the opportunity to fill any empty rucksack space with his stuff. Suddenly I was laden with a First Aid kit, baseball hat and hip flask. We walked in silence as we ascended Foggy Peak.

To avoid the unpleasantness and unprofessionalism of bitching about Ian for the rest of this account, I shall instead take the opportunity to provide some useful information and adjectives about our experience getting to the top of the first peak. The less said about the second peak the better.

The minimalist walking track that took us to the top of Foggy Peak, which essentially just consisted of a few cairns scattered here and there, began above the tree line and after a few hundred meters, essentially just turned into a hike up a scree field, with a few false summits thrown in for good measure. The grey, rocky expanse of the mountain side became all encompassing, as we trudged towards the blue sky up ahead. We routinely lost the path as we headed skywards, to shortly re-join it and then watch it split into two or three options further ahead. All possibilities seemed to consist of loose rocks and headed upwards, so it didn’t make a great deal of difference which one we selected. 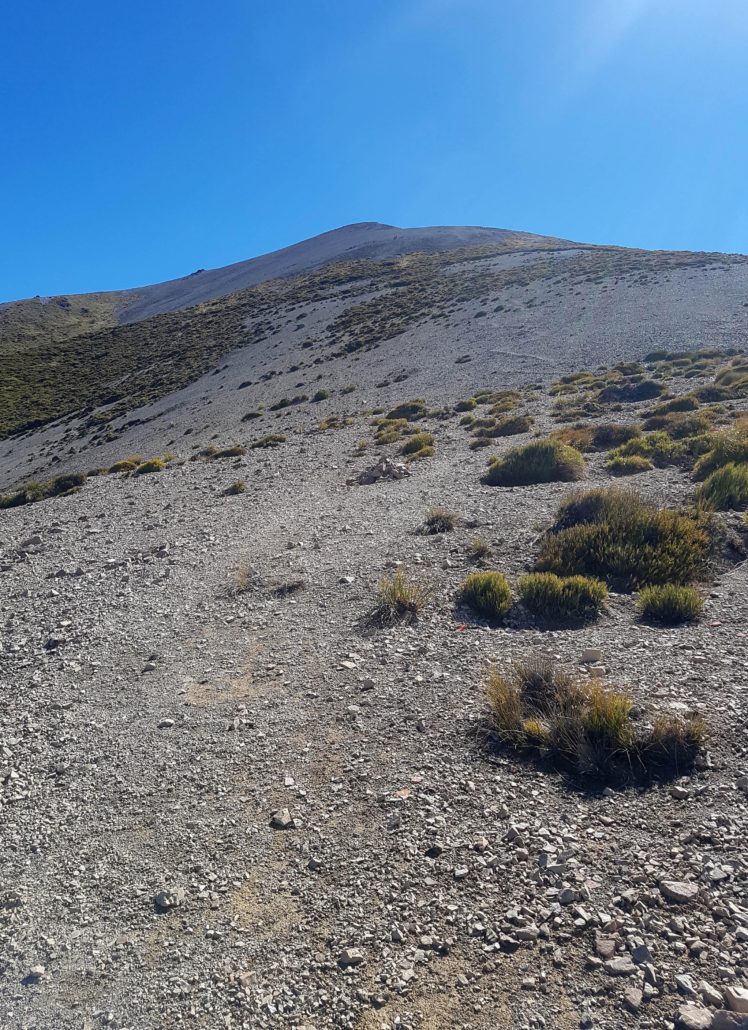 The route to the top of Foggy Peak

The air was filled with the sound of clicking, courtesy of the numerous alpine grasshoppers that littered the ground. This gave the impression of hiking through a radioactive wasteland, with the Geiger counter warning us of our impending infertility… which would have been funnier had the humans not taken my balls several months ago. The clicking was occasionally interrupted by the sound of Ian slipping on the loose stones and uttering words that my professionalism prevents me from repeating here. However, what is worth noting was the poles he was using for balance. Not one for using them myself, and the mental image of a canine using poles while walking on their hind legs is, frankly, terrifying, they did seem to be of use.  I was going to point out that the extra stability provided by the poles would enable him to carry his own goddamn stuff, but I decided to pick my battles.

After about an hour and a half of steep, loose terrain, we conquered the fake summits and reached the top of Foggy Peak. Each point of the compass provided a unique view; West extended out over the green, flat plains towards Christchurch and the sea. South provided views over Lake Lyndon and the Ashburton Lakes area in the distance. East consisted of a jagged, grey, mountainous horizon, dotted with patches of greenery. North was Castle Hill Peak, yet another rocky summit, that loomed over us. Ian checked the circular thing on his wrist, huffed, looked down at me as I was happily admiring my new bag, and then stormed off towards Castle Hill Peak. I made a mental note to post a cute as hell image of myself on Instagram when we got back to Christchurch, and then hurried after Ian. 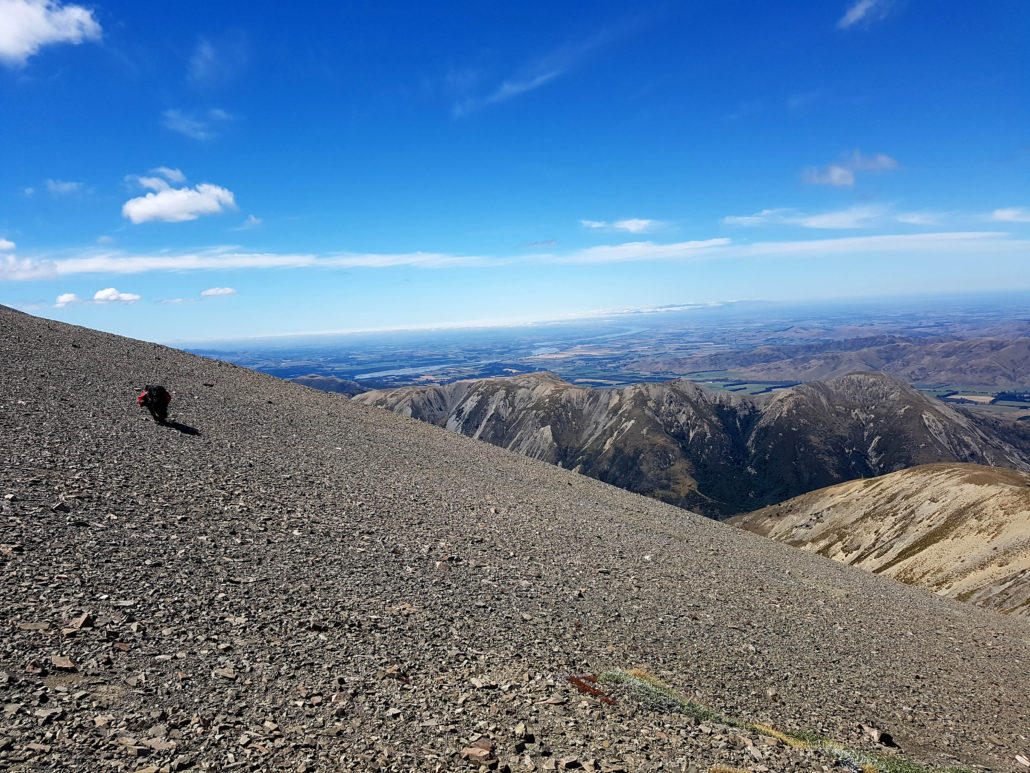 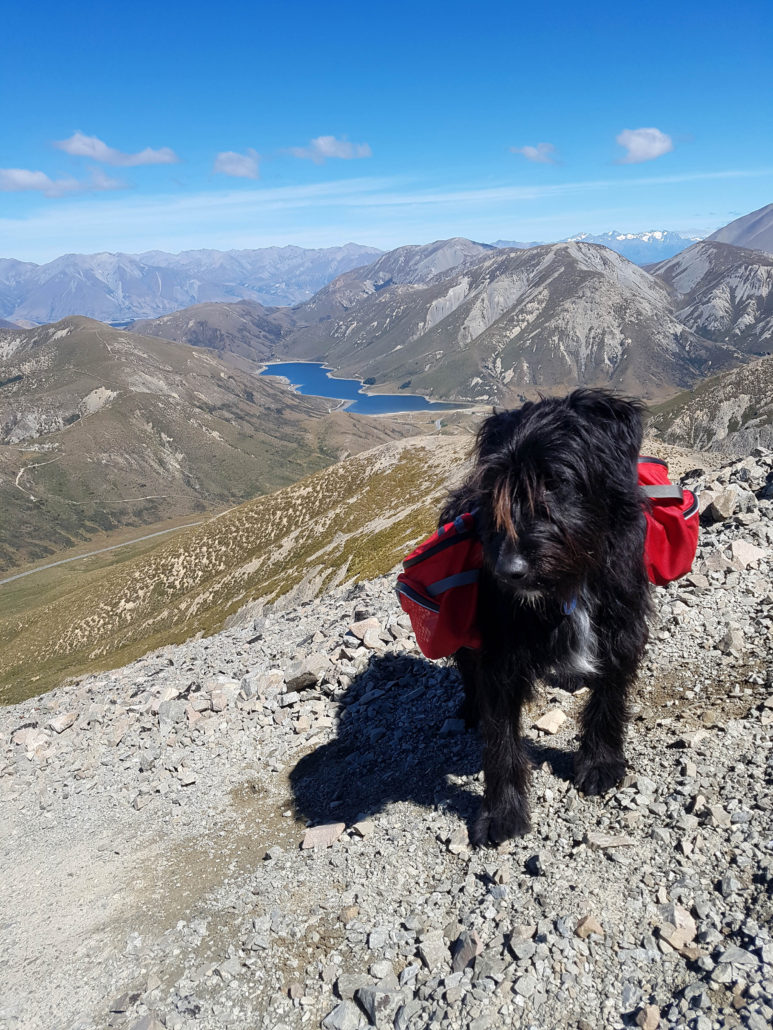 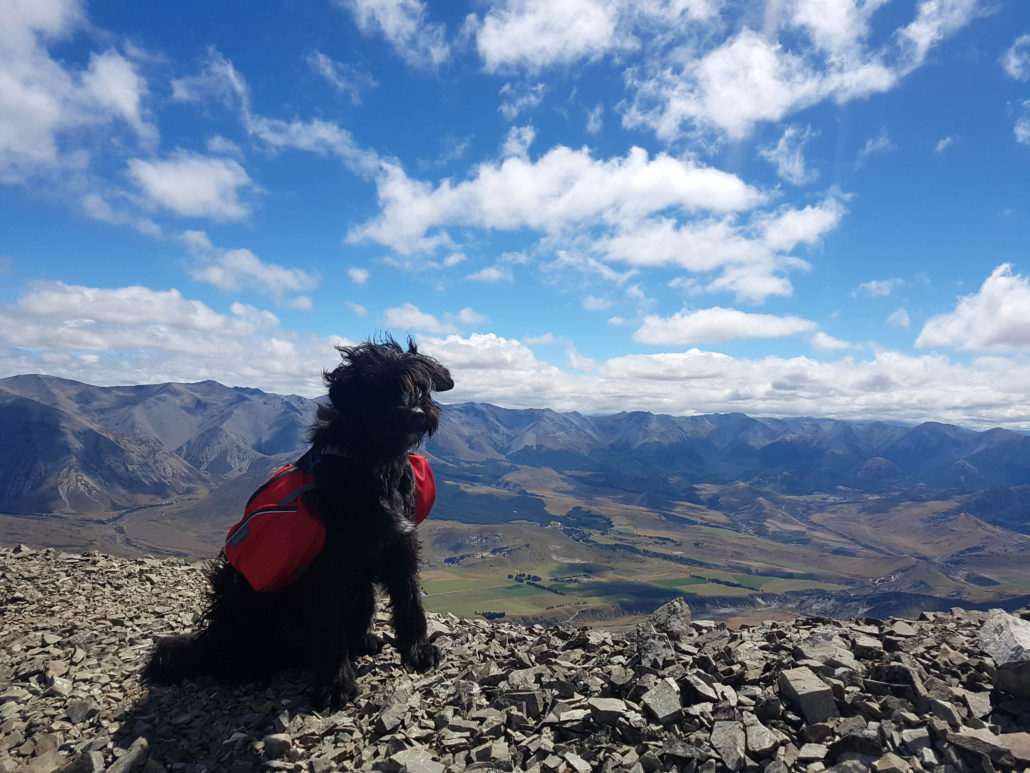 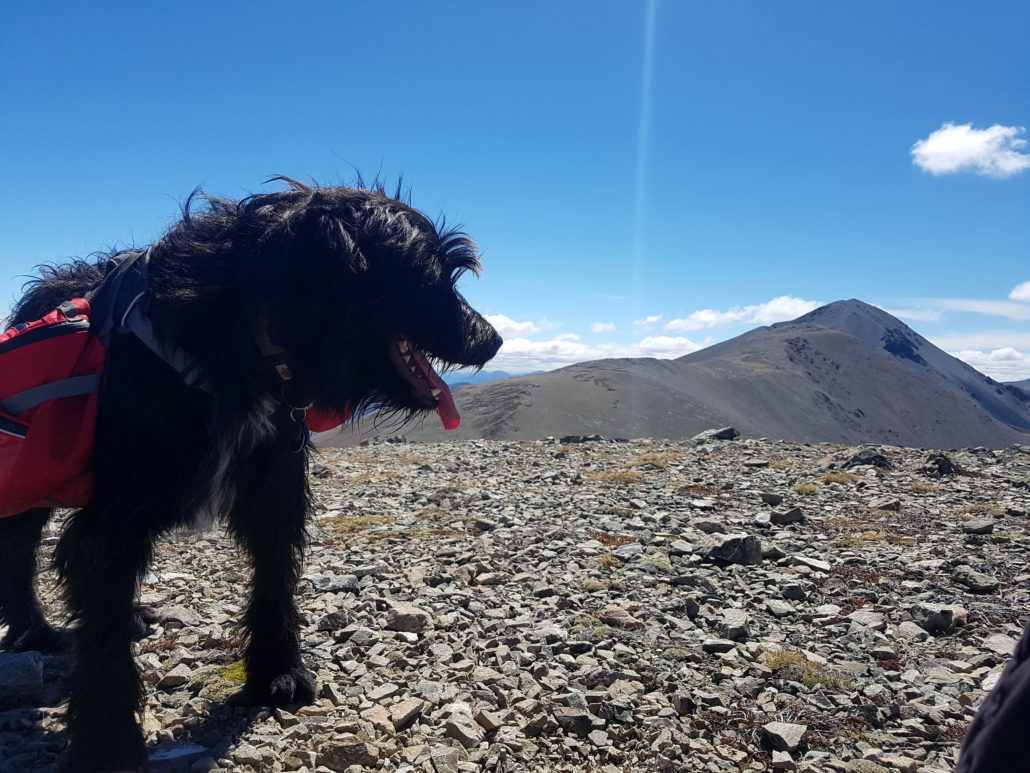 We descended down to the saddle and then began the steady climb towards the summit. The incline was much more manageable this time, with the majority of the hard work done getting to the top of Foggy Peak. An hour later, we had covered about two thirds of the distance required to make it to the top, when the human decided to call it a day and have lunch. Reading between the lines of a death stare and a head shake, I took this to mean that we had made it as far as we would for today. 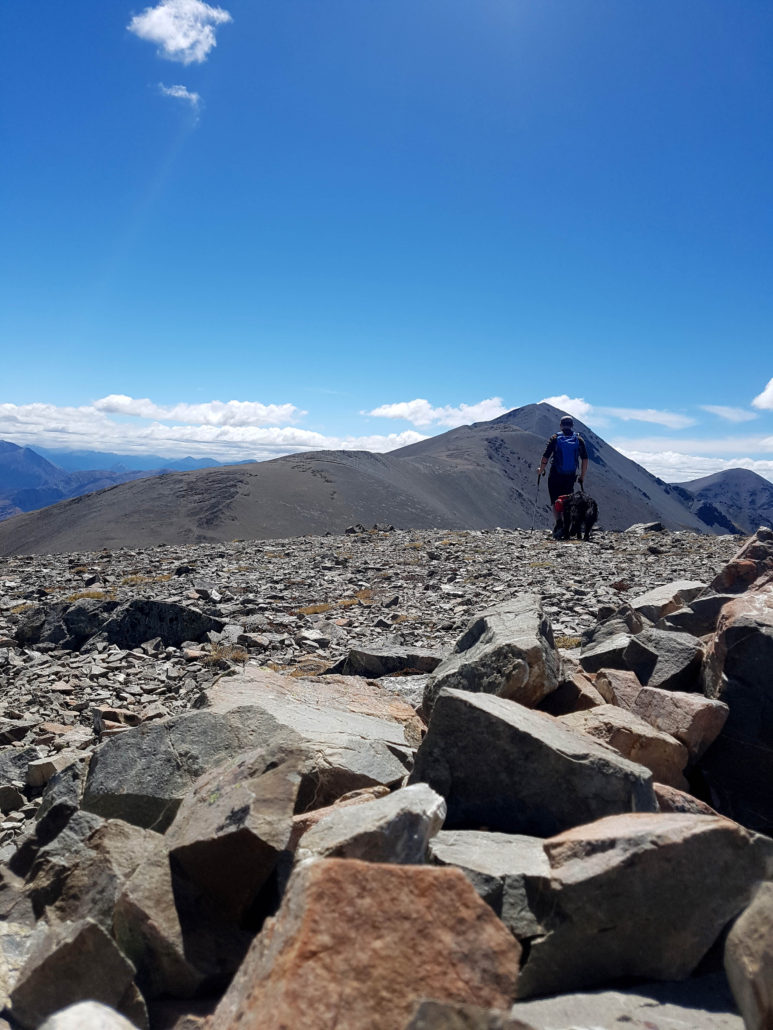 Heading out towards Castle Hill Peak

We stared out over the mountain scenery and ate our lunch, in silence. Ian was evidently adamant on making this the theme for the day. Finally reaching my breaking point, I snapped and pointed out that if he hadn’t decided to indulge in a dog based photo shoot next to some inconspicuous rock earlier in the day, we could have made more ground and been within striking distance of the peak. To back up my argument, I snatched his phone, unlocked the code, opened up the gallery app, and proceeded to swipe through the many, many photos he had insisted on taking. With the same dexterity and technology savvy ability, I’ve copied them into this article in the form of a collage, to prove my point. 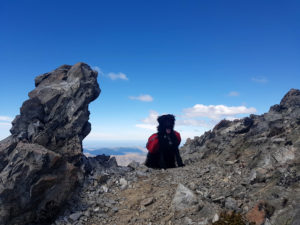 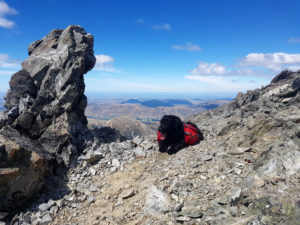 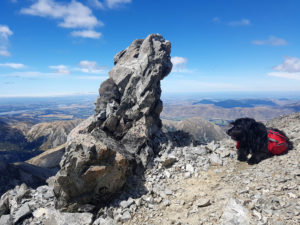 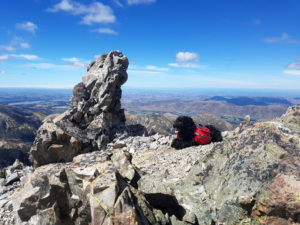 Confronted with this evidence, Ian appeared to mellow. A shake of paws and the smallest of nods to each other, we began our return to the car. The previous tension in the air was replaced with conversation, as we discussed the best photo of today to add to Instagram. Strolling back to Foggy Peak was easy enough, however the final descent to the car proved a little trickier, as the banter was regularly interrupted by the losing of traction underfoot and frantic pole waving… by Ian. I sauntered close behind, shaking my head.

Time: 4hrs (at least another hour return to Caste Hill Peak from where we stopped) 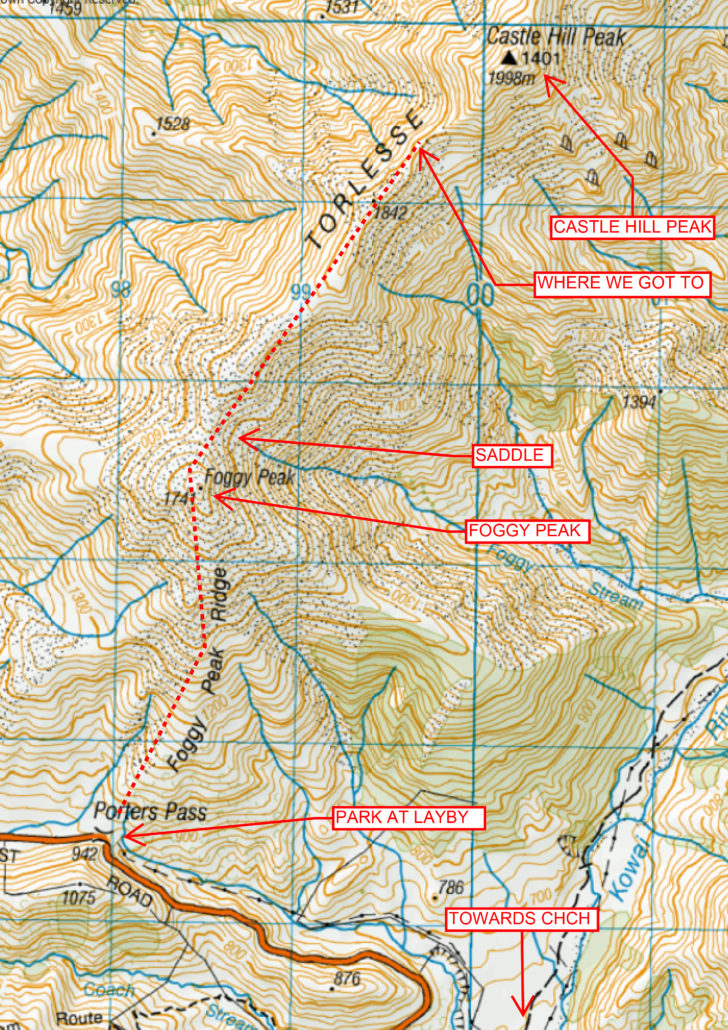