We moved as one. In synchronicity. Together. As a pack. The team we were meant to be. Up ahead were the two humans, Ian and Kat, leading the way. To my rear was Rusty, another canine, and although new to these types of adventures, keen as mustard and eager to explore. I turned to Rusty to get some clarification on the ‘keen as mustard’ idiom, seeing as he’s an older and wiser dog than myself and… god damn it! He’s wandered off again. Is it going to be like this all day? 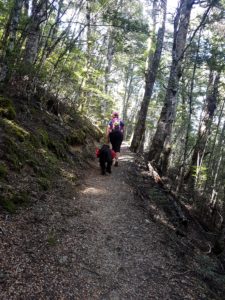 For today’s adventure, there would be no hunting, no chasing after bicycle machines, or being the centre of attention. For today, we were taking Rusty on his first outing. Rusty moved in with the humans and me several weeks ago. I will be the first to admit that I wasn’t overly thrilled with a strange dog suddenly appearing in my territory, especially one with a penchant for humping. But we talked things over, worked through our differences, and once his balls were removed, we got along much better.

His first taste of the great outdoors would be Craigieburn, more specifically Helicopter Hill, and before you ask, I have no idea why it is called ‘Helicopter Hill’. Presumably it’s the go to place for landing and launching hot air balloons, but one can only guess.

An hour and a half’s drive from Christchurch, we arrived at the Craigieburn Recreation Ground. The sun was shining, spirits were high, and I was excited to finally have all of us out together on a walk. Too often it’s just Ian and I, and don’t get me wrong, he’s a nice guy, but his company can be a little trying. I explained all this to Rusty, while we waited in the car for the humans to finish faffing about. He nodded in agreement, as most do, but seemed more interested in exploring rather than being out together as a team. I was happy to sacrifice the usual hunting, chasing and general fun stuff for the opportunity to be a pack for a few hours. I just hoped Rusty wouldn’t become too impulsive. 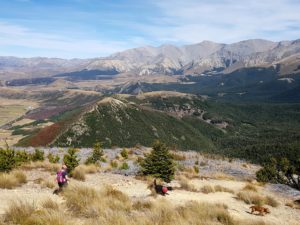 We left the recreation ground and immersed ourselves in the surrounding forest, following the Mistletoe track that would take us to the summit of Helicopter Hill. The root covered, loamy track climbed at a gradual incline through skinny, pale trees and over small streams. Being the social type, I was enjoying the time the four of us were spending together; which typically lasted several minutes before Rusty once again detected something in the air, several hundred meters away, which absolutely had to be investigated. As he bolted off into the undergrowth, to the sounds of ‘Rusty’ and ‘RUSTY! COME HERE!’ echoing around the forest as the humans shouted after him, it was only a matter of time before I was required to step in.

The humans looked at me. I looked back at the humans. I looked at the newly formed path that Rusty had just made, that disappeared into the greenery. I looked back at the humans. They continued to look at me. I rolled my eyes and darted off in an attempt to locate Rusty. Inevitably I would find him scrutinising a patch of moss, or inspecting a small pile of leaves. Escorting him back to the path, he would apologise for breaking from the pack and running off into the forest. I responded with a deep breath and reminded myself that this was all new to him. Together once more, we continued up the footpath for another good three minutes before the process was repeated again.

After an hour of this, we arrived at the base of the final climb to the summit, and also the limit of my tolerance. Taking a few moments to refuel on water and snacks, we left the shade of the trees and moved out into the heat of the day. The track became noticeably rockier and steeper, with several sections requiring the humans to go onto all fours. Rusty and I looked on inquisitively, as they scrambled over loose stones and small boulders, before the path settled down into a more solid, less steep ascent to the top. 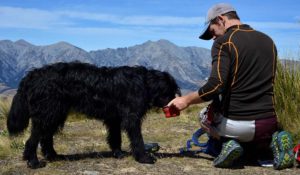 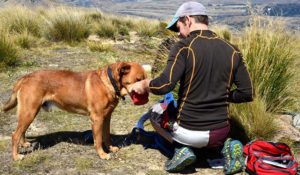 After another 200 meters we had reached the hot air balloon landing pad, and were greeted with a 360 degree, panoramic view. Mountains surrounded us in all directions, painted in pale colours. Grey scree slopes blurred into fields of tussock. Patches of dark green littered the landscape, indicating where the forests had been able to get a foothold. I sat myself down and savoured the moment, reflecting on how we had conquered the hill as a team. Moving as one. Never leaving a man be… Where’s he gone now? 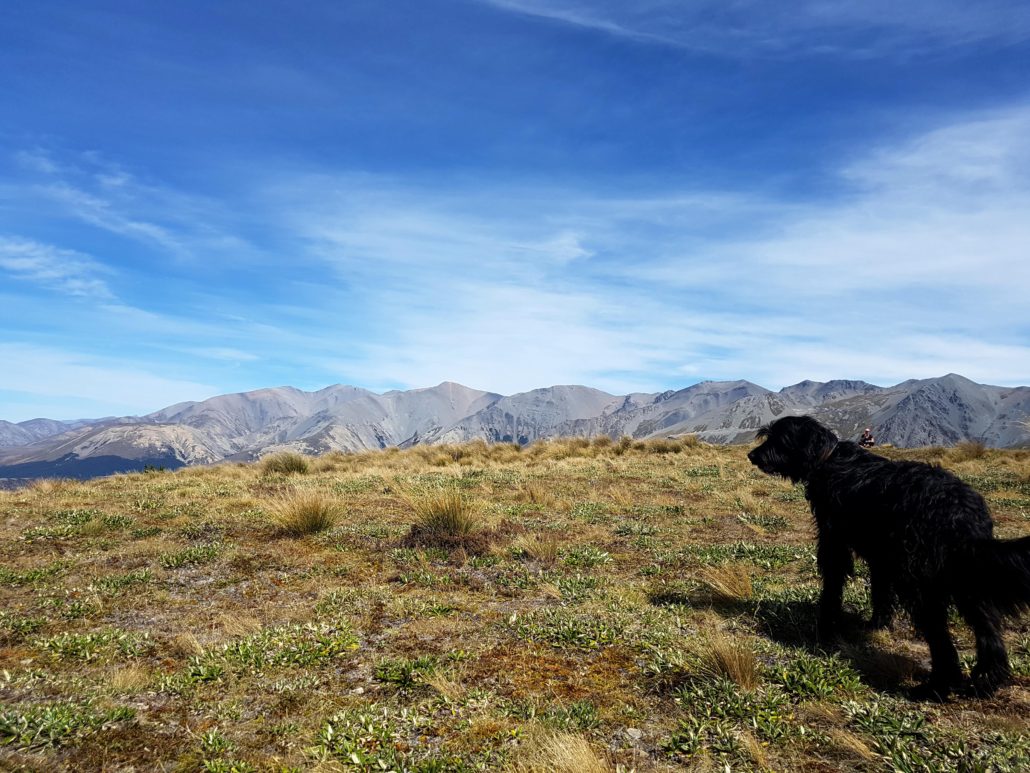 What was meant to be a lovely time spent at the top of the hill, admiring the view and looking out for fast approaching hot air balloons, was instead spent hunting for Rusty, as he aimlessly wandered off again and again. As I reached the end of my patience, it suddenly occurred to me that this was probably the closest thing I was going to get to hunting. True, it may have been a slightly watered down, tame version of what I’d seen in the movies, but it was still technically a hunt. With renewed enthusiasm, I darted through the scrub, attempting to locate the excitable one and herd him back to the summit.

It continued this way back to the car park, where we had begun 2.5 hours earlier. The path off the summit was a little tricky to descend in places, owing to the rocks, but once we were back within the trees, it was plain sailing to the recreation ground. Rusty and I came to an agreement that he could go off and explore until the humans called out his name, which would then be my cue to go hunt him down and bring him back to the pack; meaning Rusty would get a chance to explore and I’d get a chance to hunt. Everyone would be a winner.

Well, I have no idea what the humans wanted to do, probably have a nice relaxing walk through the forest, which if that was the case, they now know not to bring two dogs with them. 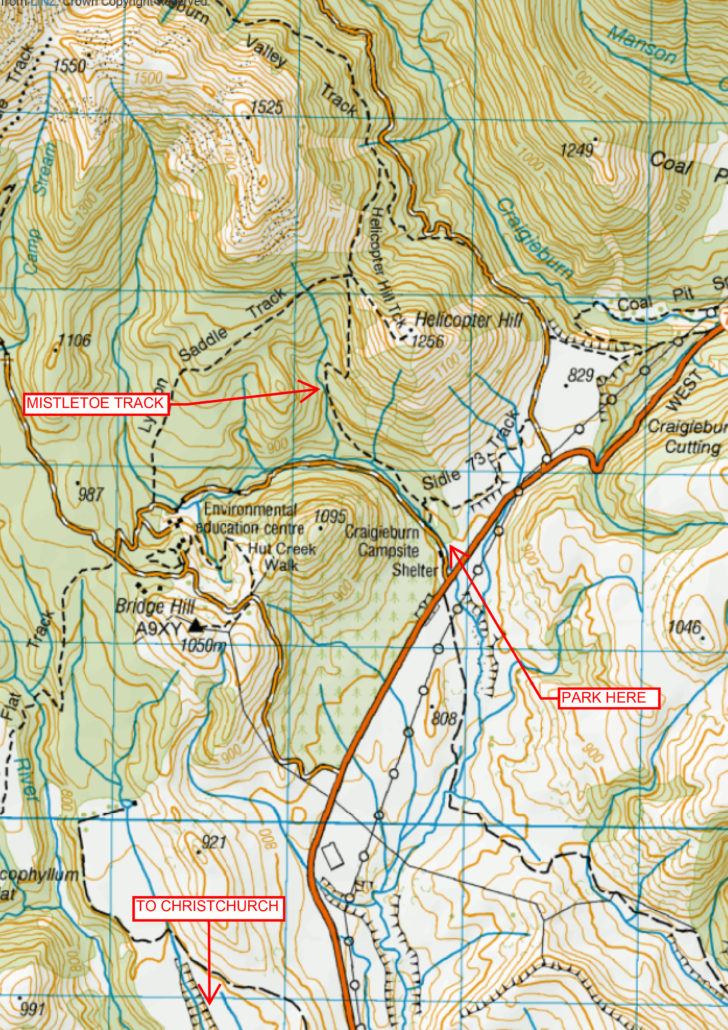