‘I mean seriously. This is just a total disaster.’ I turned to Rusty, who was busy posing for the camera, looking very pleased with himself. ‘Anything for a bit of attention,’ I muttered, and returned to staring at the thick quagmire that extended ahead of us. The humans set off, side stepping over roots and rocks, attempting to negotiate the brown, muddy puddles underfoot. Rusty leapt after them, not a care in the world, as he ploughed through the sticky horribleness. I looked down at my new shoes, all clean and fresh, and quietly sighed.

Today’s fashion parade was to be at Mt. Grey, which made a nice change to the long drives, cold mountains and deep snow that we had come to expect on our adventures. We also had a new human in the pack, who went by the name of Adam, whose only redeeming features I could tell was a winning smile and a preference to not wearing orange pants… unlike Ian. 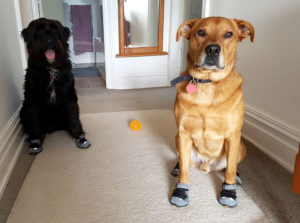 Some were more impressed than others with the choice of footware

After the Mt. Potts incident, the humans had got their act together and kitted us canines out with smashing new booties, courtesy of the lovely people at Further Faster. With our paws nicely protected within a combination of fabric, rubber and Velcro, we were ready to take on the world; and every sharp, uncomfortable rock it could throw at us.

Smugly charging out of the truck once we had parked up, my heart instantly sank when I saw the state of the track that we would be walking. ‘A pair of gum boots would have been more suitable,’ I sarcastically said to Ian, who just ignored the comment and told me to stop barking. I looked over at Adam, who smiled back. He gets it, I thought. Maybe there is more to this human than nice teeth and choosing not to wear orange pants.

We set off, and soon each step began to feel heavier and heavier, as mud started to accumulate around my paws. At one point I looked down and could just see my ankles, with the rest of my legs, and more importantly my spanking new shoes, submerged under water. I’d given up tiptoeing by this point, and instead just stomped up the path in protest. 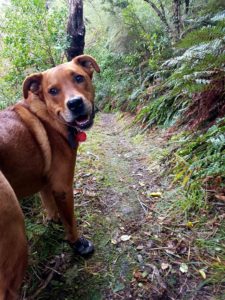 But by the end of the day, someone had definitely changed their tune

Finally, we left the bog behind us and the trail began to zig zag, as it climbed through the forest. A tributary of the Grey River followed the track below, the sound of flowing water a constant companion during the ascent through the dense, green trees. Unfortunately, the soothing, calming properties of the forest weren’t to last, as we broke through the tree line.

Our bubble of tranquillity was now replaced with bland, low lying, grassy wafts, reminiscent of our Double Bunk trip to Hakatere. Now free from the protection of the trees, a deafening wind howled all around us, causing the grass to ripple like waves, and my smart, well-kempt, long black hair to descend into something entirely unmanageable.

We soldiered on, battling against the wind and the humans’ stubborn insistence to make it to the top. Emerging onto the final ridge line that would lead us to the summit, expansive views appeared in all directions. On one side was the flat Canterbury Plains extending out to the coast where they promptly fell into the sea. On the other were the dark green peaks of Mt. Thomas and Mt. Richardson, with the snow topped mountains of Lake Sumner in the distance.

The summit was nice. Windy, but nice. The humans tried to make the best of a bad situation, mainly by having lunch and struggling to hold a conversation over the noise of the incessant wind. Rusty and I killed some time by posing next to the summit sign, and getting stuck into some Bitchin Beer Treats. Thankfully, at Adams request, we began our retreat to the safety of the forest. He’s alright that Adam, I thought. 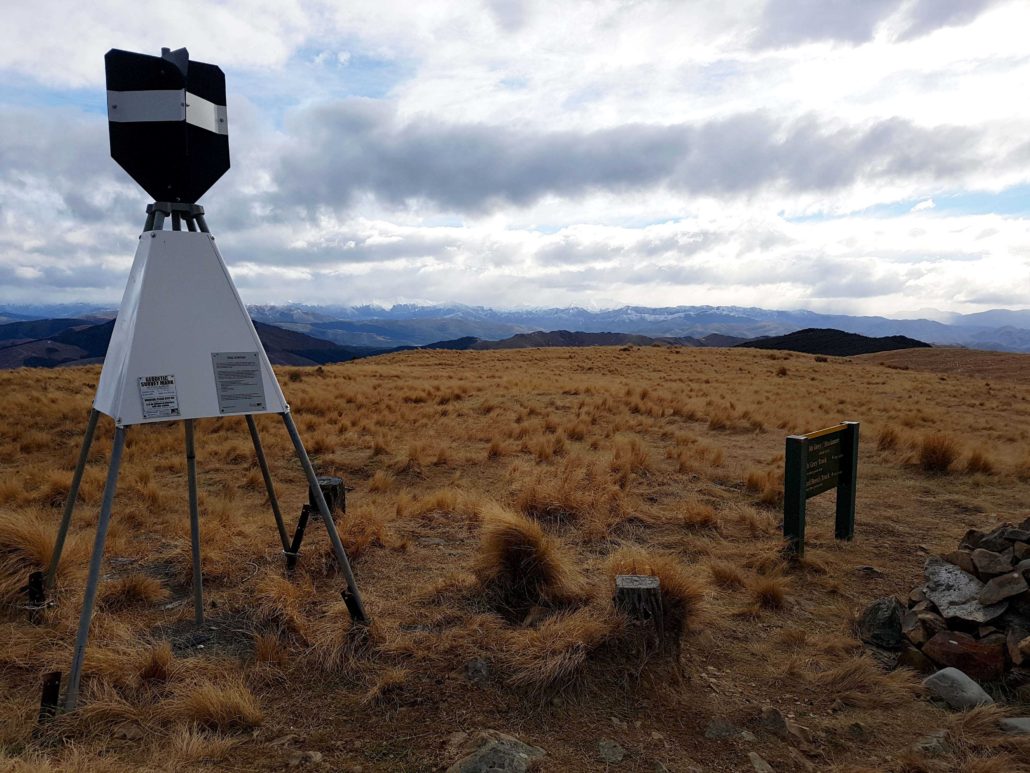 With Ian’s orange pants flapping away in the wind, I opted to stay up front with Adam, trying my best not to be associated with that fashion disaster. Like the forgotten Japanese soldiers who still thought WWII was being fought long after it had ended, Ian now resembled a warehouse raver; lost to the hills many years ago, and ignorant of the knowledge that the 90s were over. 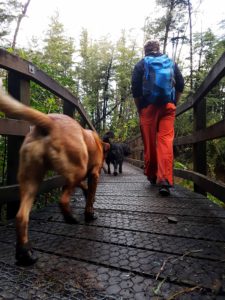 Ian’s glow sticks are just out of shot

With my booties now clean and dry, and a more respectable human to accompany, we descended off the mountain. Out of the wind and into the peacefulness of the forest, I started to enjoy myself again. Which was a mistake, as I‘d forgotten about the bog we would have to endure to be able to make it back to the truck. My heart sank once again, as the path quickly turned spongey underfoot, indicating that the fun was over and it was time to get my freshly cleaned shoes muddy… again. Taking solace in the fact that no matter how muddy I got, I wouldn’t look as ridiculous as Ian, I instead decided to embrace the situation, and bounded past, covering him in a spray of water and mud, ensuring that the fashion hierarchy was firmly established. Catching up with Adam, I gave him a cheeky wink, and he responded in kind. This could be the start of something beautiful… 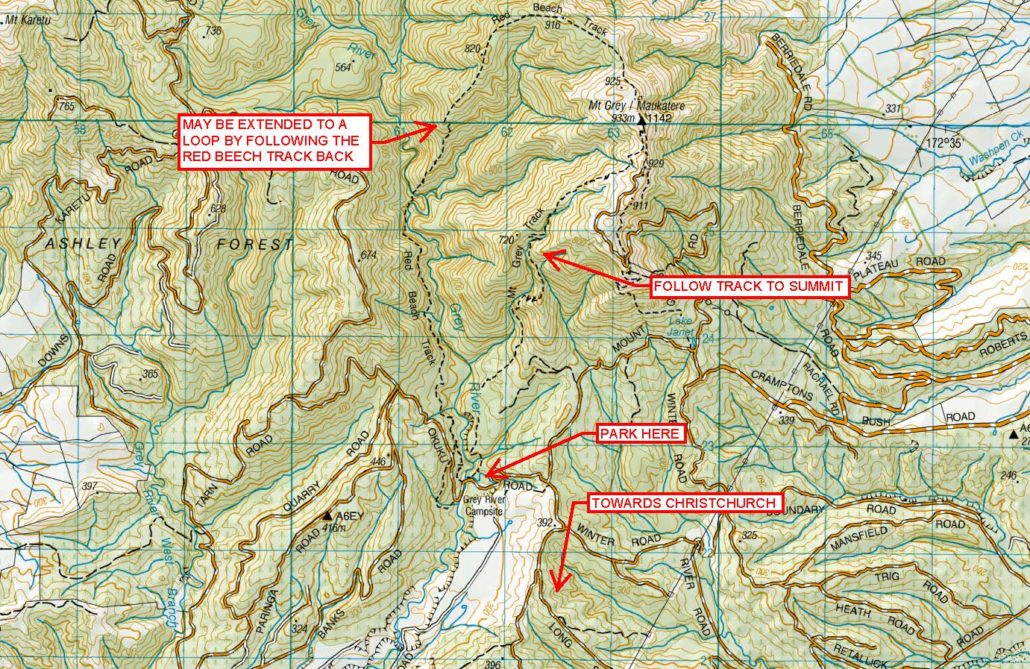