That’s weird, Rusty doesn’t normally bark that much, I thought. I turned back to look up the glistening, snow covered track. Rusty was either standing or lying in front of Ian. It was difficult to tell seeing as the snow came up to our bellies. Our paws were constantly breaking through the crusty top, and sinking through the fluffy centre to the harder pack below. I bounded over, through the snow and barking loudly, so as not to creep up and startle them. Appearing at Rusty’s side, I saw red liquid staining the whiteness around him, and Ian’s eyes had grown wide.

Regular readers of these articles may be able to guess where we were. If the title didn’t give it away, then the law of averages will have – it’s Hakatere time. We had a new human pack today, consisting of Ian, Denz, Alex and Meegan, and we were back where the Ice Cream Vans lurk. Arriving at the start of the Mt. Potts track, the pack faffed about, or chatted among themselves, or did whatever is traditionally done before setting off on an adventure. To kill time, Rusty and I scouted the area for ICV’s but alas, none were to be found. Returning to the pack, I noticed that all the humans had large, rectangular boards strapped to their bags. It suddenly occurred to me, this was a hunting party! Ian had returned with reinforcements and ICV clubs. I had underestimated him. With renewed enthusiasm, we set off towards the mountains. 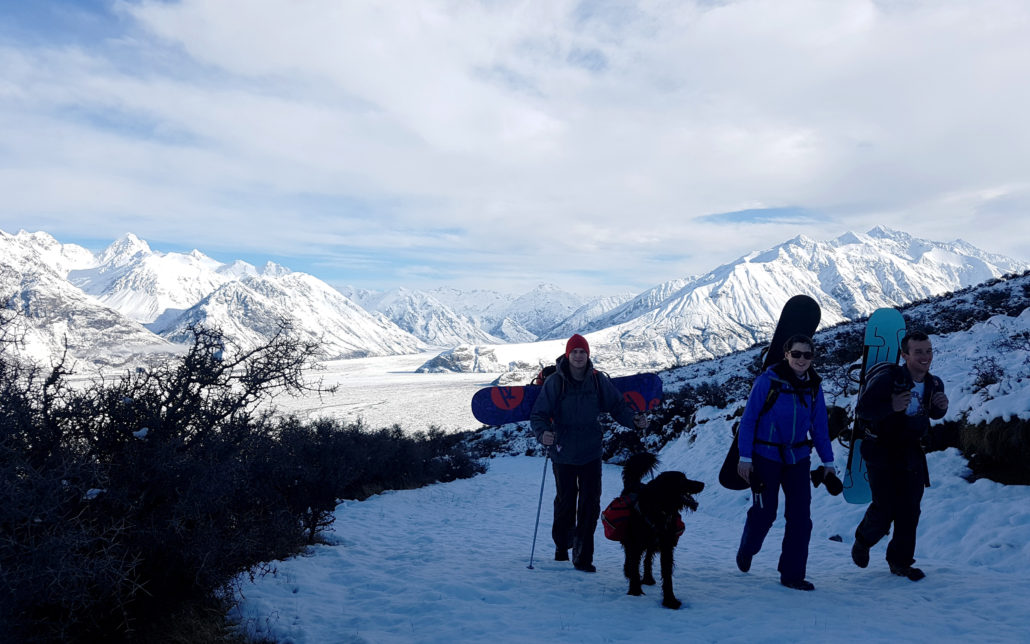 Armed and Ready to Crush some ICV’s

The day was fresh and crisp, with uninterrupted views down the valley towards the snow topped Cloudy Peak range. The area was incredibly different to how I remembered it several months ago, now that the greens and browns were replaced with whites and blacks. Wispy white clouds hung above us, making it seem as if the mountains were extending into the sky.

It was only several weeks ago that I wondered what snow was, and now I was surrounded by the stuff. Sometimes soft, sometimes hard, or crunchy, or tasty, it seemed to cover a lot of bases. The pack seemed happy enough, with smiles all round. Beaming, Rusty bounded around, seemingly intent on rummaging through every bit of available white stuff. 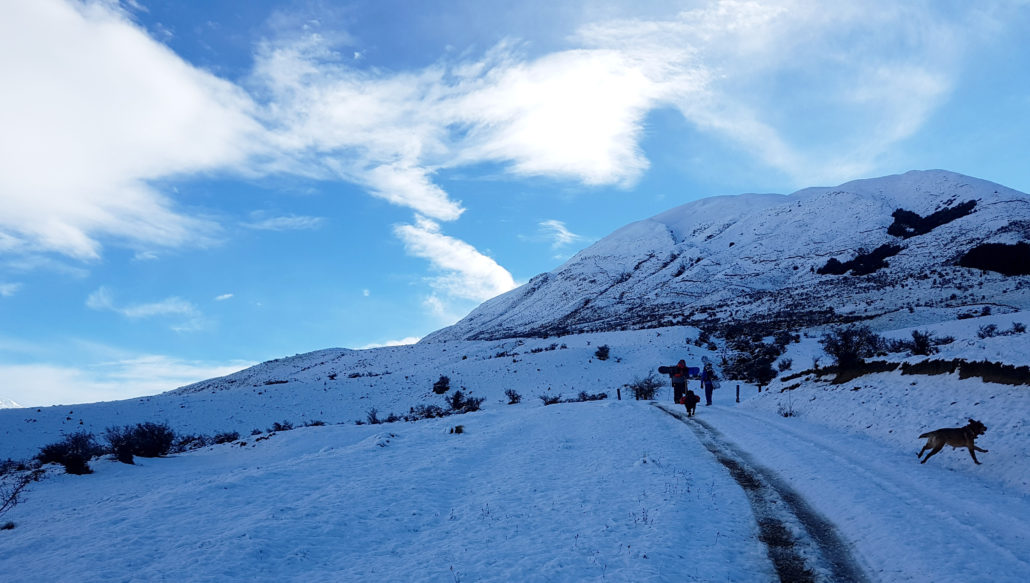 Overhearing the pack’s conversation, the intention was to follow the track to the old Erewhon Ski Field, at which point we would presumably be at a vantage point to pick off any stray ICV’s. Rusty and I would then get an opportunity to see the ICV kill boards in action. The track we were following was the old ski field access track, which was 4km long and ascended 600m into the surrounding peaks. 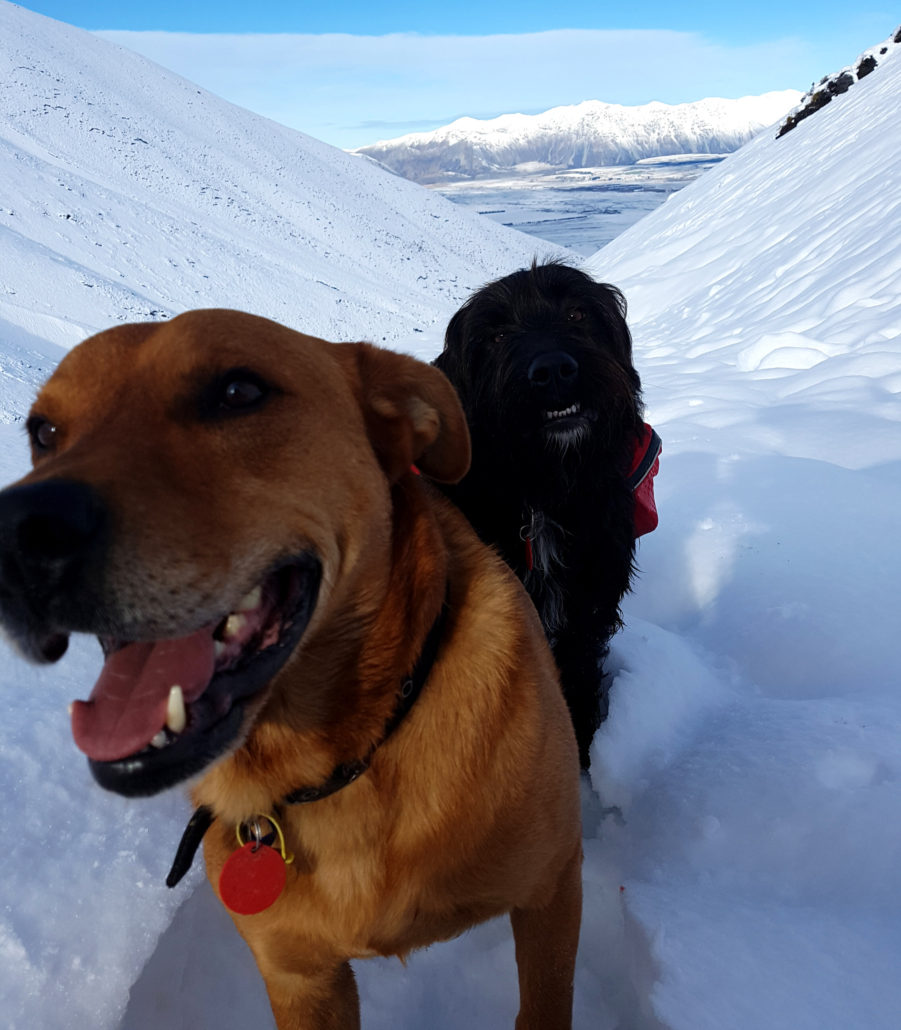 Yes… Obviously not all Photos of me are Adorable

The higher we climbed, the less the pack talked, as conversation was replaced with the crunching of snow underfoot. After two hours of marching up the track, we eventually came to a plateau, providing an excellent view into the valley below and over Mt. Sunday. The snow became thicker and crispier, and the surrounding mountains grew in size, as we crept deeper into the valley. Mt. Potts was on the right hand side, and some nameless peak on the other. With no confirmed sightings of ICV’s, the pack stopped and began to take the boards off their backs. Finally, we were going to see how these mighty, powerful, boards of destruction were meant to be used…

By strapping it to your feet???

Confused, I watched as one by one the pack set off down the track we had spent so much time walking up. And one by one I watched them fall over. As I chased after Denz, politely enquiring as to how sliding down a snowy track would help with locating ICV’s, I heard Rusty bark behind me. 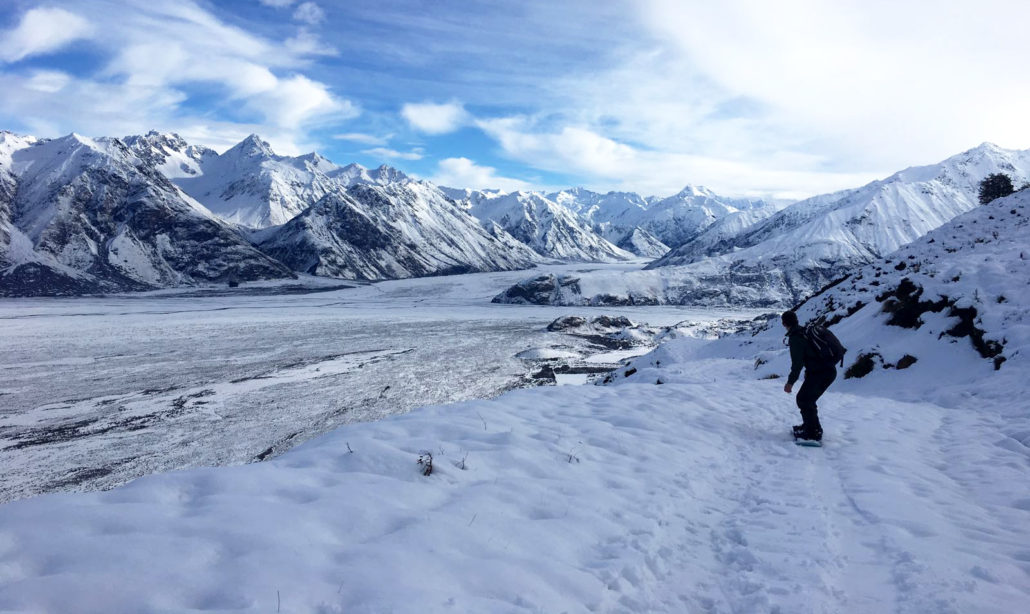 I just don’t get it…

It appeared that the front edge of Ian’s obliteration board had collided with Rusty’s back leg, cutting it above the paw and causing a torrent of red stuff to spill out everywhere. Ian looked concerned as he inspected the leg, which then turned to worry. He set off down the mountain, instructing Rusty to run ahead. I followed the trail of bloodied paw prints down the track to where the humans had eventually gathered, huddled around Rusty. Wrapping a thin bit of cloth round and round Rusty’s crimson coloured leg, tension hung in the air. I did my best to break it by shouting loudly that everything was going to be OK, but this just seemed to make the situation worse.

With red juice now prevented from leaking everywhere and making an awful mess, Ian, Rusty and I set off down the track with Ian running ahead, board under his arm, in preparation to smack out the way any advancing ICV’s. What a guy. The rest of the pack descended behind us on the boards. Occasionally I could hear a shout or yelp, and a body fall to the floor; presumably another ICV had been taken out by the boards. After all the effort it had taken to get up here, all the failed hunting trips, it was typical that I would miss out on a kill because of Rusty. 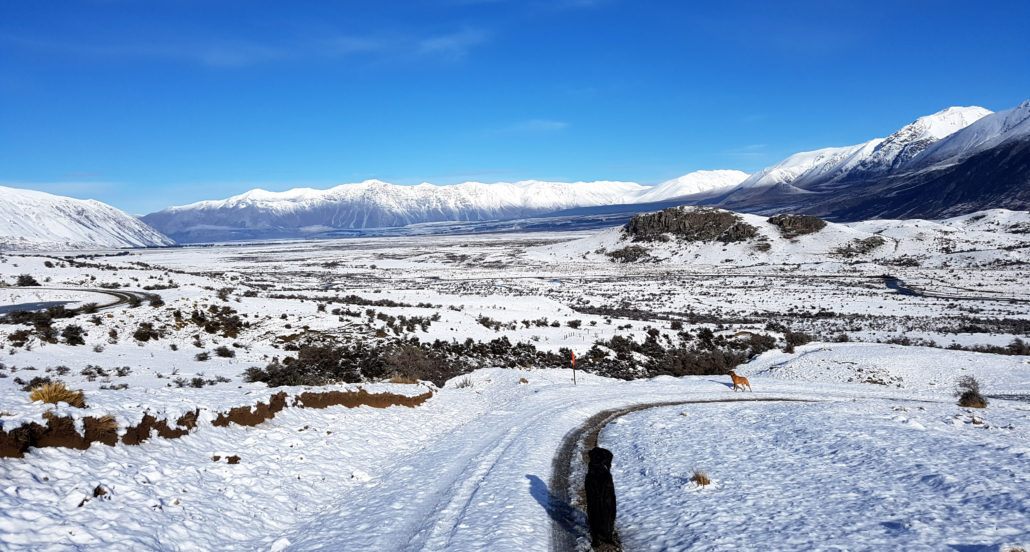 Making it to the Bottom in One Piece. Mt. Sunday in the Middle Ground

Rusty and I followed closely behind Ian, as he ran the entire way down to where we had parked. Arriving at the cars out of breath and tired, he opened up the truck and we both jumped in. Rusty was happy enough, and Ian’s facial expression seemed to be a little more positive. Shortly afterwards, the rest of the pack arrived. Judging by the amount of snow they were covered in, I reasoned that it must have been one hell of a battle with the ICV’s.

The following day Rusty was taken to the vet to have the cut looked at, and was stitched up. Funny story – after all the piss taking he has given me for being ever so slightly camp, guess who ended up having a finger up his arse. I have no idea why exactly the vet felt it necessary, but who cares.

Not Smiling Anymore More are we Buddy

Distance: 9km (To the ski field and back would be around 15km round trip)

Time: 4hrs (walking up and running down)

The trip highlighted the importance of being prepared. Luckily we had a first aid kit with us. The nearest population is Lake Clearwater. Although judging by all the anti-dog signs there, I doubt you’d get much sympathy if anything was to happen to a fellow canine. 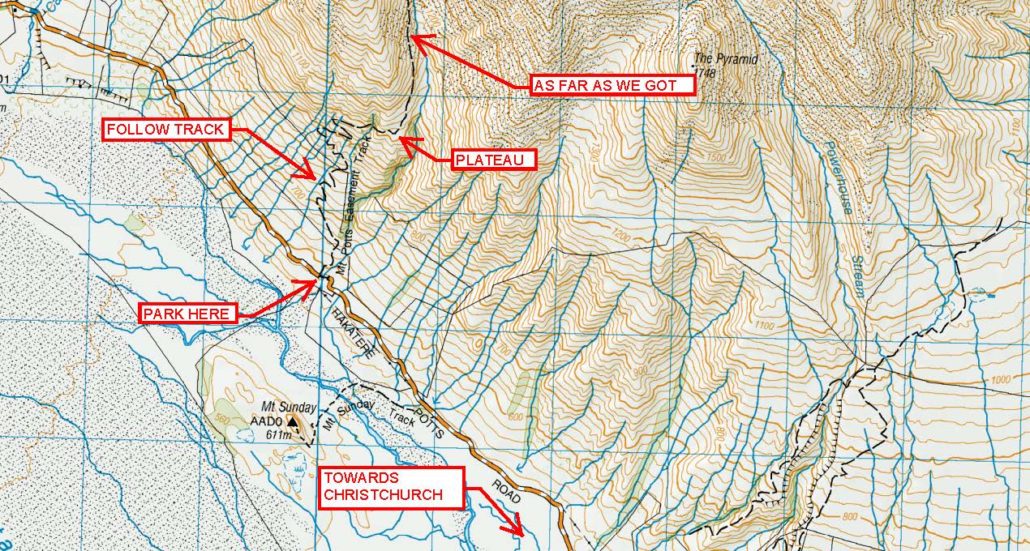