‘I don’t know where the other bootie is,’ I defensively replied. Ian stared at me for a few seconds, pretending not to understand what I just said. Finally, he threw his arms up in the air and stormed off towards the bushes to continue looking for the missing shoe. We had only experienced several minutes of the Mt. Thomas car park, before being promptly ushered back into the truck and interrogated. Rusty and I watched from the rear seats as Ian and Adam wandered around, poking through bushes and grass. Several minutes passed before they returned looking glum, and we were released again to begin our walk. 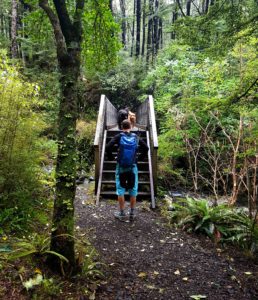 … Ian and his apparently awesome shorts

Ian was sulking, staring at the floor and responding to my attempts at making conversation by telling me to be quiet. I was going to make a joke about his electric blue shorts, a small, but overall not particularly great improvement on the orange pants from the Mt. Grey outing, but thought better of it. I looked over towards Adam for encouragement, hoping to build on our relationship from a week prior, but he was busy wrestling with Rusty, as he attempted to drag Adam though the mud.

Well this is a great start to the walk, I thought.

For what it’s worth, we were walking up Mt. Thomas, the next peak along from Mt. Grey. There were some similarities to the week before; the same pack, horrible, muddy conditions and a sky full of clouds, but morale was at an all-time low. After the success of the booties at Mt. Grey, the humans had brought them along again. However, they had not done the straps up tight enough, resulting in several of the shoes instantly coming off, which was now somehow our fault.

To make matters worse, at the start of the trail we had come across a missing person sign for someone called George Jack Russell.  It was dated several weeks ago, which didn’t bode well. However, in the never say never spirit of canine optimism, Rusty and I called out, hoping that the lovable sounds of our voices might entice the human from the depths of the woodland. 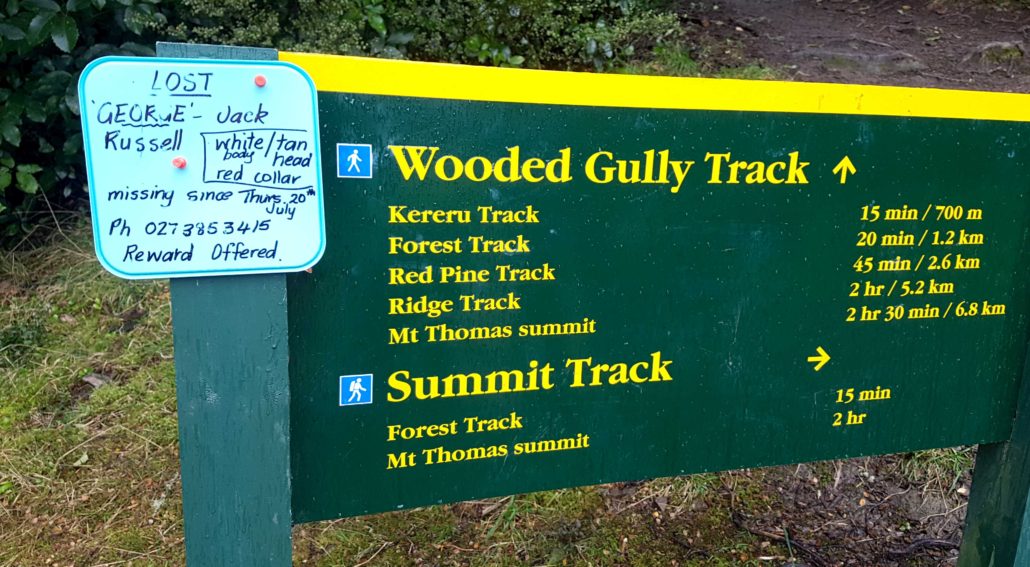 We plodded onwards and upwards, the track seeming to steepen in grade the further we climbed. On the plus side, the mud had subsided, evidently having collected in the quagmire at the bottom of the track. Old pine needles now littered the floor, carpeting the ground between tree roots and rocks. Higher and higher we climbed until the canopy above began to thin and tall trees were replaced with bushes and shrubs, treating us to the first view of the day. Well, I say ‘we’ – technically, it was just the humans who got to enjoy it, as we weren’t able to see over the surrounding vegetation. I’m therefore unable to describe it for you, however Adam described it as ‘quite nice,’ if that’s of any use.

Unable to enjoy the ‘quite nice’ view, Rusty and I resorted to trying to locate Mr. Russell again, running up and down on the zippy, lead thing, calling out his name.

I couldn’t help feel that Ian was really hindering our search effort, possibly as a result of still being annoyed at the missing bootie earlier that morning.

Several minutes later we were at the summit, and were able to enjoy the view for ourselves. As it was much like the view from the top of Mt. Grey, I suggest you go read that account to save me repeating myself here. Otherwise, imagine a ‘quite nice’ view and you’re pretty much there. 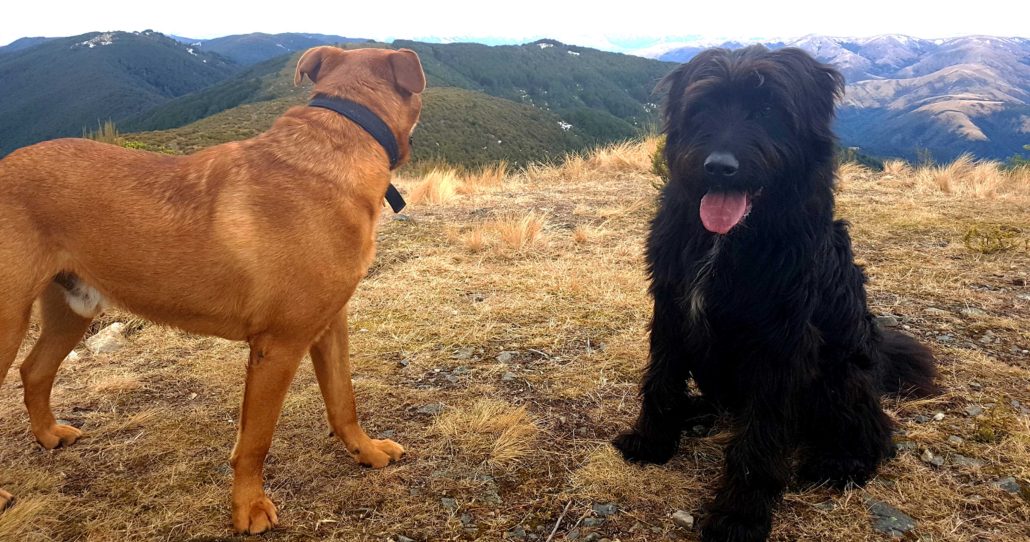 Our descent off the mountain was via the picturesque Wooded Gully Track, accessed via a short walk along the mountain top. It snaked its way through the forest, crossing small streams, bridges and fallen trees. The clouds above us finally lost their absorbency, and rain fell from the sky, causing the surrounding forest to glisten. Crossing a final bridge and climbing up an unexpectedly steep section of track, we were back into pine forest, where the trees lined themselves in neat, orderly rows, almost as if it was done on purpose.

Unfortunately, we arrived back at the car park empty handed, unable to locate either Mr. Russell or the missing bootie. Ian’s mood began to darken at the realisation that we’d have to leave without either, although I have to admit he seemed a little more concerned about a missing shoe than a person, but that might just be a reflection on the sort of person he is on the inside. We watched from the confines of the truck as Ian and Adam hunted around in the nearby foliage, attempting to locate the missing items.

Ian returned first, looking beaten and unhappy. He stared at me through the rear window. I stared back. His nose was up against the glass, and his angry, short, sharp breaths began to steam up the thin, transparent layer that divided us. He filled his lungs with air in preparation for emptying a tirade of blame onto me, when suddenly a victorious Adam appeared. Holding the bootie high in the air, a beam of sunlight broke through the clouds, causing his shiny, perfectly aligned teeth to dazzle us all in his triumph. My hero. Ian’s demeanour abruptly softened, and suddenly all was forgiven and forgotten, such is the fickleness of his temperament. 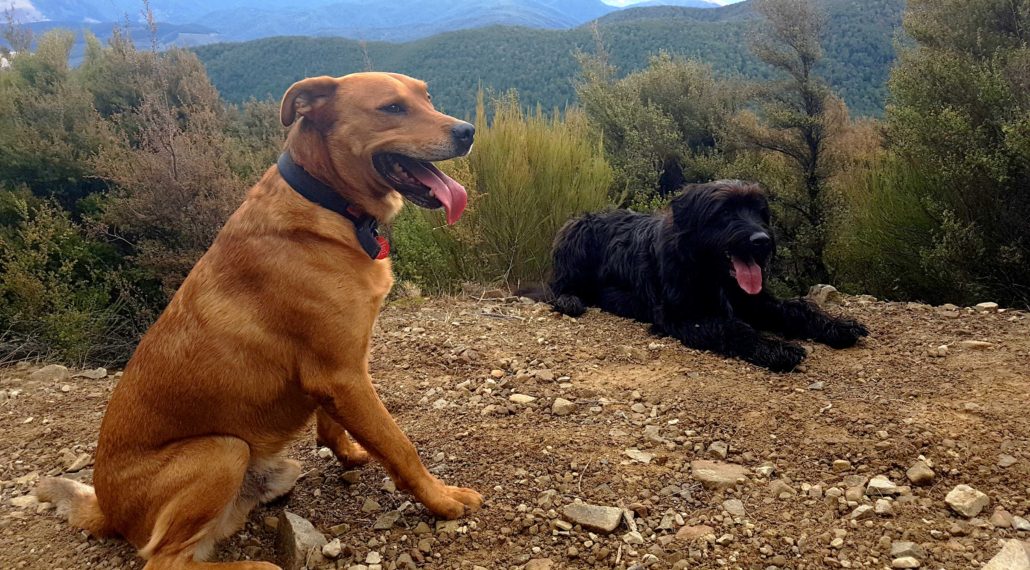 We drove back to Christchurch. Ian was finally smiling and chatting for the first time since we had arrived. Rusty spread himself across three quarters of the back seat and fell asleep. Adam casually stared out of the window, now wearing his cool shades and humouring Ian as he waffled on. I stole quick glances at Adam from the rear of the truck, hoping he wouldn’t notice, before eventually falling into a peaceful, happy sleep.

For those of you who care more about a missing person more than an easily replaceable, generic bootie, Mr. Russell spent nine days in the forest before being found. 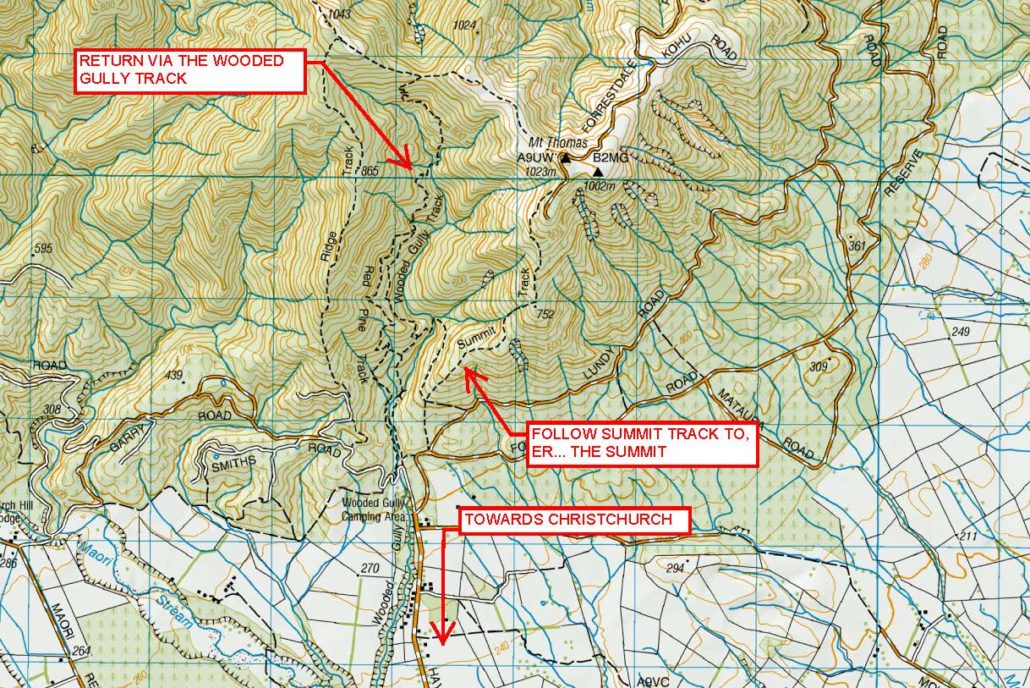 Maybe Things Aren’t All That Bad
Scroll to top