‘Hakatere Conservation Park! Abandoned ski field! Sunny Day! I’m in!’ was the response I excitedly gave Ian when he asked if I was up for another adventure. And so Ian (our chauffeur), Rusty (my adopted canine brother) and me (your plucky young protagonist) piled into the truck to embark upon yet another 2 hour drive. Not that I want to start bitching so early on in a story, but these trips would be made a little more bearable if Rusty didn’t insist on taking up three quarters of the back seat. I’ve literally been forced to sleeping on all fours in the past, as a result of Rusty nonchalantly draping his body across all available space.

Anyway, now that’s off my furry chest, as we drove towards Hakatere, Ian seemed more excited than usual, grinning and yapping away about his love of abandoned places. He was reminiscing about his time in Cyprus, when he discovered a half built hotel which was incredibly eerie and spooky. What didn’t help matters was that when he was exploring the basement he came across an old ice cream van, got scared, and had to leave. To be honest, I had no idea what he was on about and wasn’t really listening. I was more concerned about trying to salvage more than an envelope sized seating area on the back seat from Rusty, as he sprawled himself out, staring forward, pretending not to notice my passive aggressive nudges to reclaim some seating space.

I conceded to standing and staring out the window, attempting to keep my eyes open as the scenery gradually turned from green flatness to grey steepness, as we drove deeper and deeper into mountain country. We were aiming for Mt. Potts, which is home to the now abandoned Erewhon ski field, to do some exploring and take some interesting photos for my Instagram account. Ian explained that the 70 acre ski field was opened in 1964 and used a number of converted farming buildings for accommodation and restaurant lodges. He went on to say that access to the terrain was via snow cats, as opposed to rope tows or chairlifts, making it unique to New Zealand at the time, but had now been shut for a number of years. My interest peaked at the mention of ‘Snow Cats’, which sounded like an interesting challenge, but then quickly dipped again at the following mention of ‘rope tows’ and ‘chair lifts’… which don’t sound particularly feline.

Arriving at the start of the 4×4 access track, the intention was for Ian to travel on his pedal powered, triangle-and-circle shaped machine. Rusty and I would follow close by, providing suitable protection from orcs, goblins and questionable accents, as after all this was King of the Jewellery territory (it’ll probably take a second read to get that joke. Some may argue the reference is too soon, but… meh). 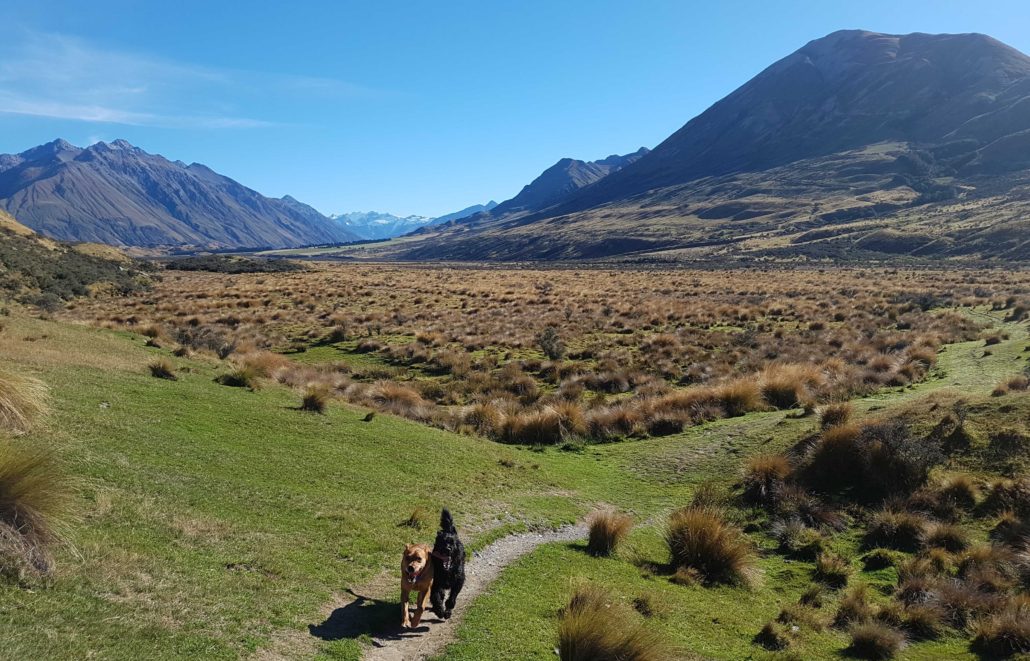 On patrol. Mt. Potts in the background

Just as Ian was opening the truck door to let us loose on patrol, he spotted a nearby beast and quickly slammed it shut. After some fumbling and replacing the triangle-and-circle machine on the back of the truck, Rusty and I were released, but this time on leads. Putting aside the indignity of being on a lead, it also rendered us useless as protectors in this hostile land. We set off, with me and Rusty lurching forward in an attempt to scout out any potential threats. And scout out we did, immediately discovering some wild, presumably threatening beasts that would have made quick work of Ian. We fired off some warning barks and the mastodons casually, although no doubt fearfully, moved away, letting out a wounded ‘moooing’ sound. Evidently this encounter was enough to spook Ian and we returned to the car, less than 4 minutes after leaving it. I was starting to get an idea of Ian’s sensitive disposition, and can only assume that these were the same monsters he encountered in the hotel basement – so they’re called ‘Ice Cream Vans’. I made a mental note for future reference. 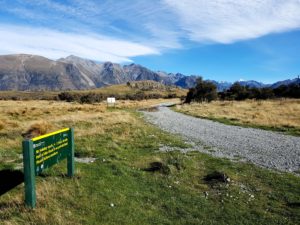 The truck was turned around, and driven back along the rocky road we had come in on. After several minutes we came to an abrupt halt. Ian jumped out and inspected a green rectangle with yellow markings on it, clicked his heels together, like the cheeky Victorian rapscallion that he is, walked back to the car and released us – without leads! We were ushered through a gate and into a huge open expanse. Mountains lined the horizon in all directions, and the flat area contained within was full of tussock and shrub, providing plenty of ambush spots for me and Rusty to investigate. Ian’s eyes were drawn to the large mound at the centre of this expanse, its steep sides lined with fragmented rock. With a distant, faraway look in his eyes, he announced, almost dramatically: ‘So this is Edoras, home… to the RIDERS OF ROHAN!’. He spun round with outstretched arms, wide eyes and an open mouth to face Rusty and I, expecting some sort of acknowledgement. We both just shrugged our shoulders and sprinted off into the tussock to flush out more Ice Cream Vans. 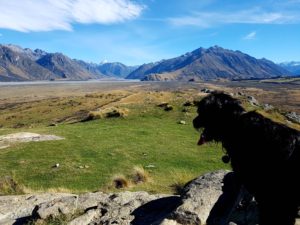 With the warmth of the sun beating down on us, we followed the orange tipped trail markers that led us towards the central mound, with a now sulking Ian bringing up the rear. Helpful bridges provided access across the narrow, fast flowing rivers – which I will confirm, flow a lot faster than expected when you are in it – and it wasn’t long before we were at the base of the mound. A short grassy climb to the top put us at possibly the finest uninterrupted 360 degree view I’ve experienced. Don’t get me wrong, Helicopter Hill was good, but at least here I didn’t have to concern myself with unexpected hot air balloon landings (again, slightly random reference unless you just clicked the Helicopter Hill link). Let’s just say it was really, really good. And from a strategic point of view, which I imagine ranks highly on the requirements of most visitors, it was second to none. There was no chance that any ice cream vans would be taking us by surprise up here. Once the perimeter was secure, the three of us settled down upon the warm rocks for lunch. Ian handed out some homemade dog biscuits – known as Bitchin Beer Treats. Rusty joked that they had been named after me and all the bitching I do. I laughed nervously and looked over to Ian, who just silently nodded in agreement, and continued to stare out at the all-encompassing panorama.

The slightly awkward silence was soon broken with people breaching the perimeter, signalling that our solitude on this modest peak was over. Our early start on the day had meant that up to this point, we were the only visitors here; however that was evidently coming to an end. We retreated to the safety of the truck, protecting us from the possibility of attack from orcs, tourists or ice cream vans, allowing us to fight another day. 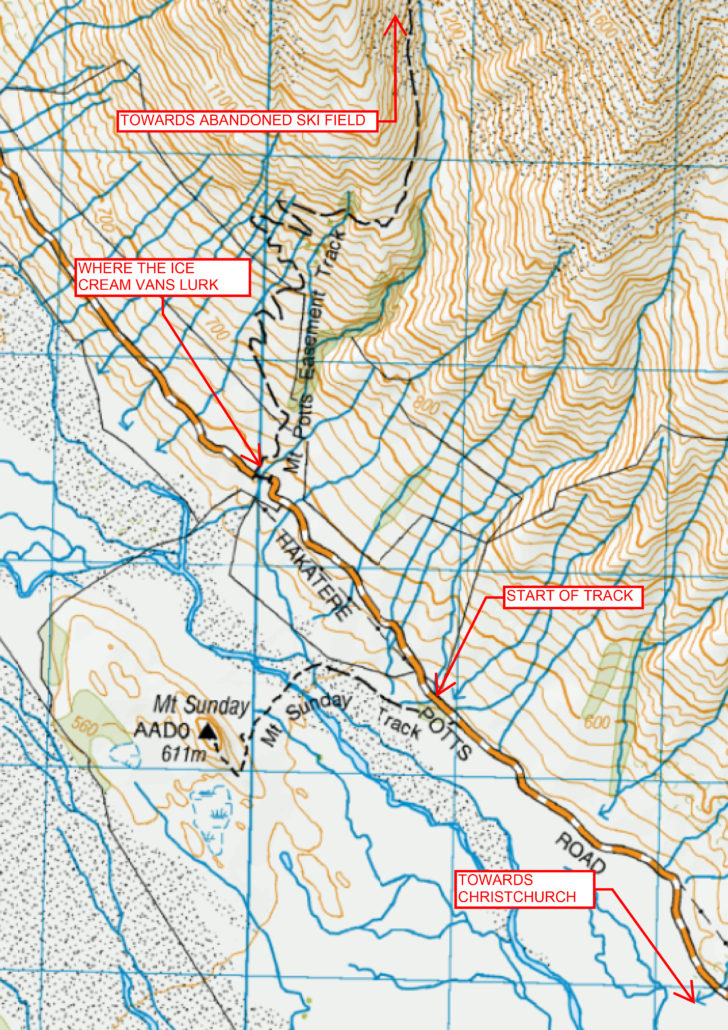 The Edge – Craigieburn
Scroll to top