Mt. Bradley is the slightly neglected (some may say rightly so) peak that sits next to the more favourable Mt. Herbert on the Diamond Harbour side of the Banks Peninsular. Similar in stature to Mt. Herbert, but with a much more mountain feel (whereas Mt. Herbert gives the impression of a large hill with straight forward path that leads gradually to the top, Mt. Bradley has a summit that is neatly lined with cliffs, giving it a ‘top tier of a wedding cake’ look. Which I feel you just don’t see enough of these days). We opted to take a more DIY approach to getting to the summit, mainly consisting of a straight line to the top. The intention of the walk was to get a bit of scrambling experience and, if necessary, whip out the rope and practice some skills to set us up for some more challenging routes over the summer.

Starting out in Orton Bradley Park – which it should be said, is a very cool, tucked away little place – it has the feel of a remote camp site, disconnected from the city, but it is still within 30 minutes’ drive of Christchurch. There is a wealth of activities going on there such as walking, climbing, biking, golfing etc. and is essentially an ideal holidaying spot for anyone from Christchurch who gets car sick on long drives.

We parked up and began our walk through the park and out onto some fields where we could get a good view of Mt. Bradley, which, as is typical in straight line paths, was right in front of us. 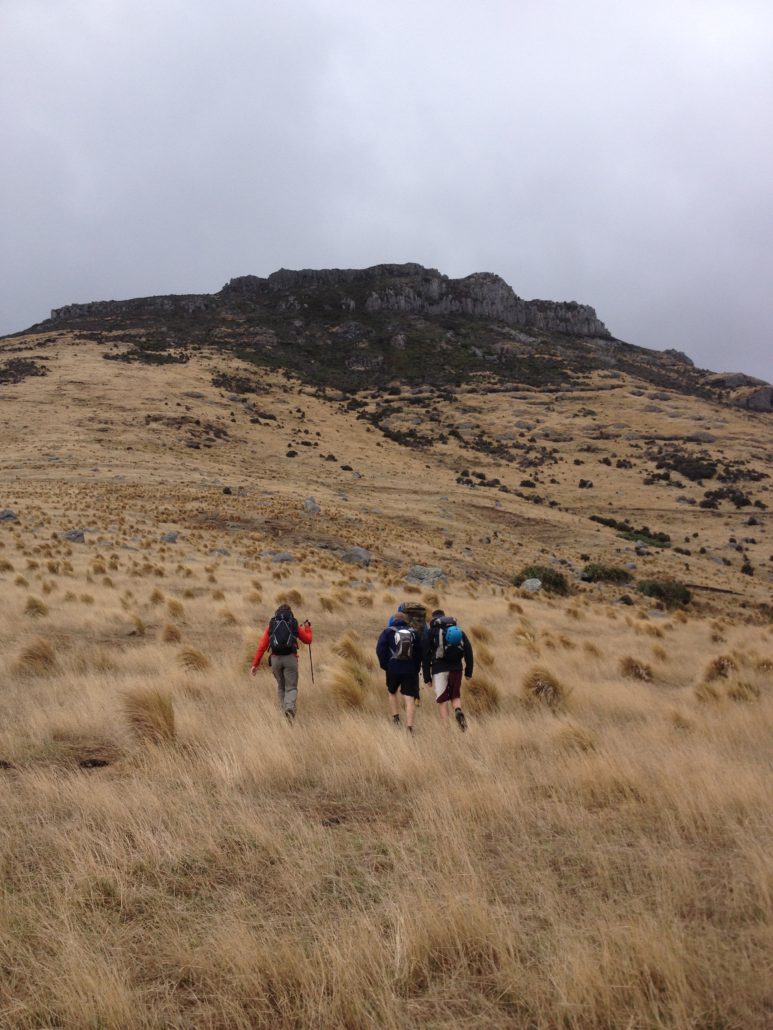 The Mt. Bradley expedition team walked their own road… in a straight line

As we arrived at the base of the mountain, two things happened. Firstly, it got steeper, which shouldn’t have really come as a surprise seeing as we were standing at the bottom. Secondly, and possibly more worryingly, we started to notice a gradual thickening of gorse bushes. This was more of a concern for three of us as we had opted to wear shorts for the walk in anticipation of summer arriving. Now, I don’t want to sound too melodramatic when discussing the thorny, prickly, spikey nature of gorse, but man it stings as you force your way through it due to a lack of an actual path.

We were aiming for a sheer rock face up ahead of us (the base of the wedding cake if you will) and getting there involved scrambling over a mixture of fallen rock and thorny bastard vegetation. The gradient of the slope wasn’t overly steep and stingy shins aside, it was a fairly straight forward scramble to the face. 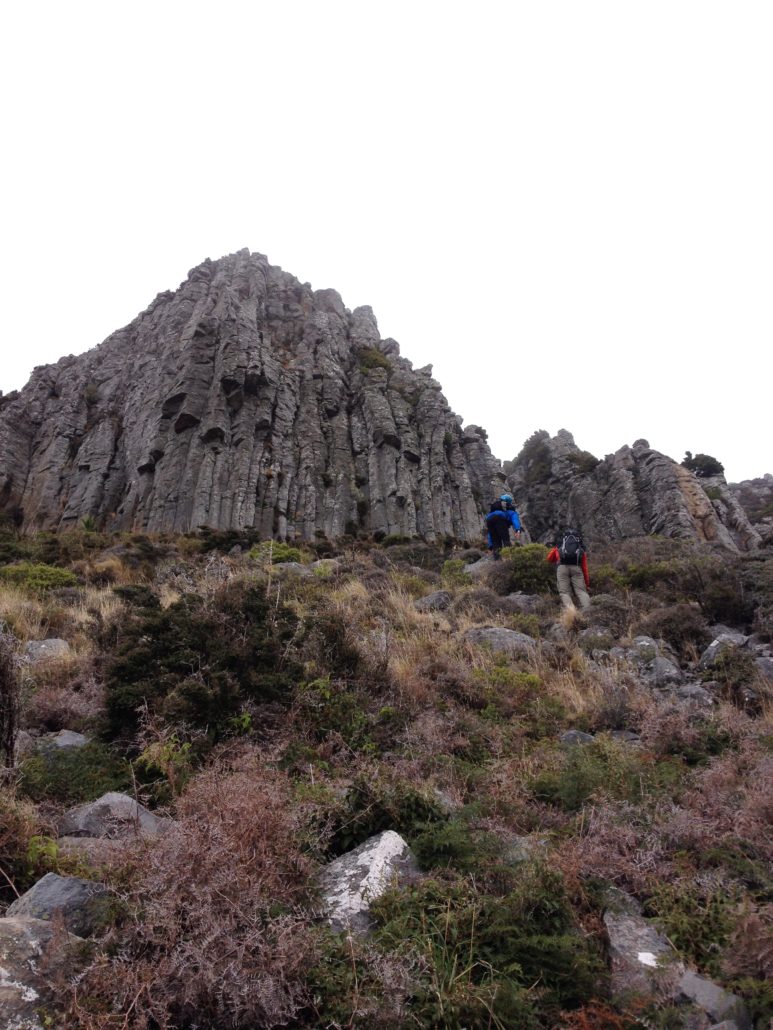 The first taste of the cake

Arriving at the rock face, we quickly noticed that up close the cliff took on a distinctly more overhanging, overbearing, less tasty nature than how it looked from a distance. Mindful of the regions recent experience in tectonic plate activity, and looking around at all the large fallen rocks about the place, we decided to continue up between a break in the cliff face that would eventually take us to the top. The vegetation at this stage was getting all the more dense and with it the amount of ‘oh’s’ and ‘ah’s’ and aggressively sounding ‘HMMM’s’ as we waded through more thorns. Sticking to the rock face as much as possible, so at least only 50% of your body was in contact with the bastard thorns, we began to notice how precarious the rock face was put together. There were numerous gaps and missing bits and chunks that had fallen off and various other ways of saying ‘the wall wasn’t all there’. Up close, it seemed as if the cliff had been built in a similar fashion to those stone walls that are so ubiquitous in the English countryside. Granted, the centuries old stone walls are still standing today, but they’re not tens of meters tall and built in a seismically lively area of the world. In a general sense all this would have been fine except that we were using the wall for hand holds and were in danger of accidentally pulling out the one bit of rock that was holding this entire cliff together… in fairness, that probably wouldn’t happen. But seeing as I didn’t get a photo of the cliff up close, it’s better if I hype it up a little so that you can knock it back down a few pegs and we can meet somewhere in the middle with what it was actually like.

It became harder and harder to force our way through to the top as the vegetation became more and more dense. At times it felt like we were climbing through that prickly side of Velcro or towels that had been washed without fabric softener and left out to dry for a really long time. Needless to say, which evidently I still am, things were getting tough!

Nearing the top of the mountain, legs and hands stinging, we eventually made it to the summit and to our delight and then immediate regret, we were confronted by a sea of gorse bushes. I think our response when we got to the top was something along the lines of ‘Yeahhhh-Ahhhhhh-Nooooo!’. As far as we could see was thick gorse smiling sarcastically back at us (yes, by this point I had actually given the gorse a personality as it gave me a target to wave my fist at). ‘This wedding cake ain’t so sweet’ I said out loud. Then immediately wished I hadn’t as I realised that I hadn’t explained the wedding cake metaphor to the rest of the group.

Odd comments, a lack of a path and thorny bastard gorse aside, the top of Mt. Bradley is actually quite interesting. It’s a large plateau with three sheer sides. The light cloud that had begun to move in on us provided a surreal feel that for some reason reminded me of the movie Jurassic Park. As amazing as the theme tune is, it was little consolation as it repeated round and round in my head as we trudged through more and more gorse on our retreat off the mountain. We did consider abseiling off to try and save some time, but unsure what we would be actually abseiling into, more gorse no doubt, we opted to walk off the back of the mountain and then double back on ourselves to eventually come down through Orton Bradley Park. Finally finding a path on the way back to the park, we were greeted with a site that suddenly made the bleeding shins and constant bitching all seem worthwhile. For the entire walk we had Diamond Harbour and the Port Hill behind us with and with numerous challenges we had to overcome to get to the summit, we hadn’t really stopped and taken in the view. Now that the weather had cleared and we were on more established ground, we were able to take in our gorseless surroundings, wonder at the view and appreciate how terrible the wedding cake metaphor really was.

The wedding cake mountain on the left, Diamond Harbour in the back ground

Faffing on the Heaphy Track